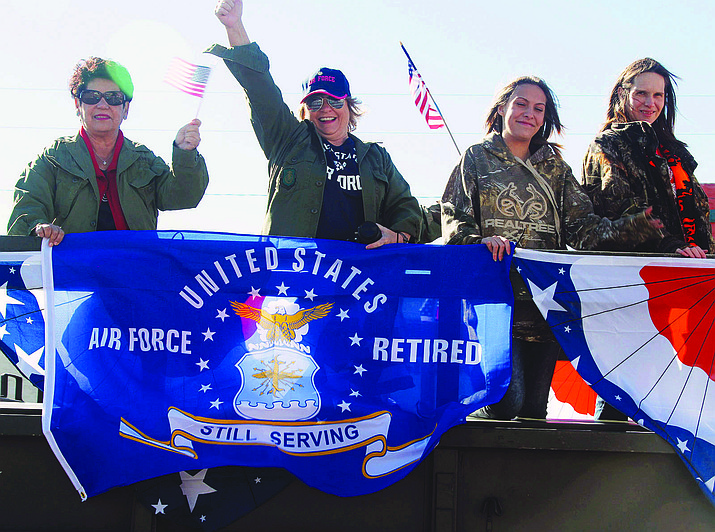 KINGMAN – Having served four years in the U.S. Coast Guard during the height of the Vietnam War, it was instinctive for Dave Stafford to come to the rescue of the annual Veterans Day parade when the local VFW post and Jerry Ambrose Veterans Council could no longer put together a parade committee.

The committee wanted to be in the parade, but not run the parade, said Stafford, a member of Vietnam Veterans of America and chairman of the parade for the last couple of years.

“The parade is something that shows people in this country really do respect and support our military personnel who went out there and gave of themselves to provide our freedom,” he said Tuesday.

With support from the Downtown Merchants Association and Marine Corps League No. 887, the Veterans Day Parade is scheduled for 10 a.m. Saturday, starting at Fifth Street and proceeding west on Beale Street to First Street.

The theme this year is “Semper Fi,” honoring the U.S. Marine Corps, and has more than 40 entries as of Tuesday, Stafford said.

The Young Marines will carry their banner to lead the parade, followed by old military vehicles, police and fire departments, Boy Scouts and Girls Scouts, Kingman Shriners Club, Confederate Krusaders, Knights of Columbus and Daughters of the American Revolution, among other civic groups and organizations.

The Hualapai Tribe will be participating along with local businesses such as 66 Auto Sales 2640 and American Woodmark. The Mohave Democratic Central Committee will also be represented. Floats will line up at 7 a.m. on Oak Street.

Kingman’s Veterans Day Parade was started 16 years ago by VFW Post 10836 in Butler and marched down Northern Avenue until Stafford moved it downtown where children’s games, music and vendors are set up at Locomotive Park.

He turned the parade route around to run downhill for the veterans’ “wheelchair brigade,” but he hasn’t seen the brigade in a while.

The Tri-State Veterans Honors Trust will hold its fourth installation ceremony at 11 a.m. honoring 30 active-duty personnel with military banners that are hung from light posts around Kingman.

Byron Buckholtz, president of the Tri-State Veterans Honor Trust, said it’s important that soldiers know they have someone at home who cares about them.

“The pride that a soldier feels when they look up at their banner is one of pure joy and comfort in knowing that their family, friends and community are proud of them and have not forgotten the sacrifice they make each day,” Buckholtz said.

Freedom is not free, and neither is the parade, Stafford said. He’s still looking for monetary donations to pay for the costs. Checks can be made out to Kingman Downtown Merchants Association and mailed to Veterans Parade, P.O. Box 221, Kingman, AZ 86402.

Stafford said he gets some assistance from Veterans Court, which sends offenders to work community service at the parade, and the Boy Scouts helped a little last year, but it’s a lot of work for him and he’s always trying to find people to assist with the parade.

Downtown Merchants Association stepped in to bring people downtown for maximum participation in the parade, he added.