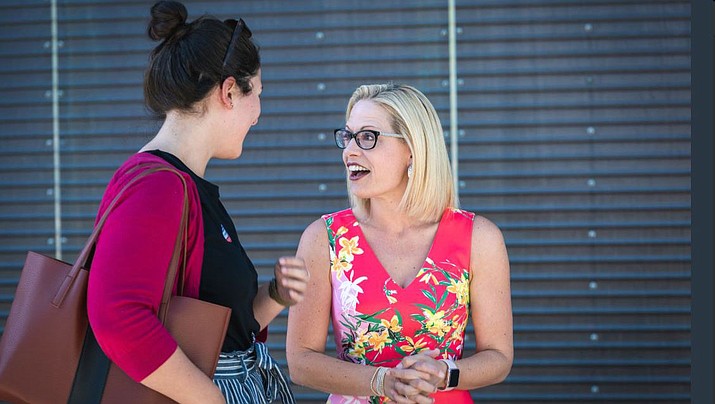 PHOENIX — A judge set a Thursday hearing to consider how to handle a lawsuit filed by Republican party officials seeking to prevent some late-arriving ballots from being counted in Arizona’s nail-biter of a Senate race.

The suit challenges the way some counties have allowed voters to fix problems involving signatures on some early ballots that were either mailed-in or dropped off at polling sites on Election Day.

It’s unclear how many of those ballots might be involved in the legal challenge. It’s likely a small portion of the so-called ‘late early” ballots that will be processed in the coming week.

The judge in Phoenix was holding a case conference late Thursday morning to consider the issues and set a case schedule.

The suit alleges that the state’s county recorders don’t follow a uniform standard for allowing voters to adjust problems with their mail-in ballots, and that two counties improperly allow those fixes after Election Day.

The case involves ballots that are processed after polls close on election night. It says Maricopa and Pima counties, the state’s largest and the base of Democratic Rep. Kyrsten Sinema’s supporters, are improperly allowing signature corrections. It also says the two counties allow voters to help clear up signature problems up to five days after the election.

Sinema and Republican Rep. Martha McSally are separated by only a few thousand votes, and

The lawsuit alleges that signature verification must stop when polls close and seeks an injunction to halt the counting of such ballots that have been verified since then.

About 75 percent of Arizona voters cast ballots by mail, but they must go through the laborious signature confirmation process, and only then can they be opened and tabulated. If county recorders have issues verifying signatures, they can ask voters to confirm their identity.

The GOP complained about the issue before Election Day and threatened to sue. Democrats alleged it was an attempt at voter suppression and that recorders have followed the same procedures for years with no issues. Republicans said it was about following the law.

The sluggish count is a perennial issue in Arizona, but has rarely received such a high level of attention because the GOP-leaning state generally has had few nationally-watched contests. It’s one window into the complexities of mail ballots and the so-called “late earlies” that arrive just before Election Day and regularly gum up the state’s vote counting system.

This election featured heavy statewide turnout of about 60 percent, more in line with a presidential election than a midterm, part of the reason county registrars were overloaded with uncounted ballots.

One candidate familiar with the long wait is McSally. It took The Associated Press 12 days to name her as the loser of her first congressional race in 2012 because the margin was so narrow and vote counting was slow. McSally’s second and successful bid for the seat ended with a recount in December of 2014.

McSally tweeted early Wednesday that she was going “to bed with a lead of over 14,000 votes.”

Sinema tweeted that the “race is about you and we’re going to make sure your vote is counted. There are a lot of outstanding ballots – especially those mailed-in – and a lot of reasons to feel good!”

The cliffhanger Senate race comes in what’s otherwise shaping up to be another banner Arizona year for Republicans. The GOP has won every statewide race in Arizona over the past decade, and Democrats were hoping Sinema could break that streak.

The Senate contest was the marquee race, featuring two champion fundraisers who are no strangers to tight races. They are battling over the seat vacated by Sen. Jeff Flake, a Republican who decided not to run for re-election.