Why Prop 413? The minds behind it give their answer 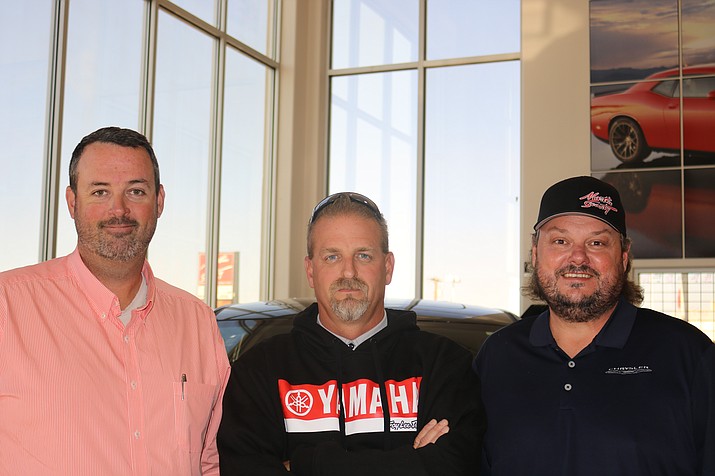 Dan Del Monaco, Tony Campbell and Cody Swanty explained that the purpose of Prop 413 was to give the voters a voice. (Photo by Travis Rains/Daily Miner)

KINGMAN – Cody Swanty, Tony Campbell and Dan Del Monaco, three of the men who spearheaded efforts for the Responsible Sales and Use Tax Act, thank the community for its support of a measure they say had a sole purpose of giving voters a voice.

Campbell, Swanty, and Del Monaco all noted that throughout the whole process they had support from the community. Del Monaco called the amount of support “staggering,” and Campbell said that by gauging that support, the three men weren’t surprised by the outcome of the measure that was on the general election ballot as Proposition 413. It passed with 61 percent, or 5,677, of the votes.

The passage means that the 1 percent added to the sales tax by Council in August 2017 gets repealed. It also means that future increases to the sales and use tax will have to go to the voters for approval.

“We had a lot of community support the entire time through this,” Swanty said. “So, I mean we felt very comfortable knowing the input we were getting from the local citizens.”

They also addressed claims that the proposition and those behind it were anti-growth. Campbell said some people believed that as vehicle dealers Swanty and himself didn’t want the competition that could be brought to Kingman as it grew through new infrastructure.

In fact, they said being anti-growth would be counterproductive to their businesses, which is why Del Monaco said “We’re as pro-growth as you can be, as pro-business as you can be.”

“It only benefits us to have more people in this community,” Campbell added.

All talk and rumors aside, the three men said Prop 413 was about giving Kingman citizens a chance to vote on the financial future of their City.

“That’s the only thing this was about was letting the citizens vote,” Swanty said.

Now that the vote is over, the City can move forward with a “defined, vetted vision,” for future financial allocations, Del Monaco said.

“There needs to be accountability instead of money just being thrown in the general fund,” Swanty contributed. “For example, we have Facebook messages that the 1 percent was going to go toward the Rattlesnake Wash interchange, but if you looked at signs around town, it was ‘Vote no to protect the police and fire departments, protect your water, protect your parks, protect your streets.’ Where’s the vision?”

On a side note, even though they have been at odds over the tax increase, the three men said they have nothing to do with the effort to recall Councilman Travis Lingenfelter.