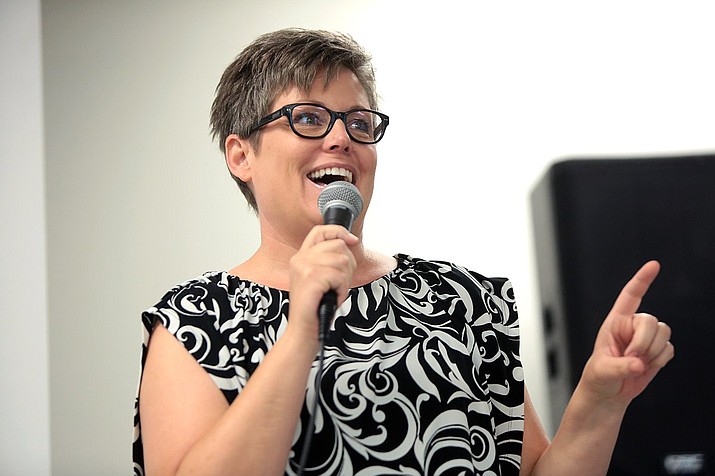 PHOENIX - New election returns Sunday put Democrat Katie Hobbs in the lead in the race for secretary of state.

The updated totals from the Secretary of State's Office give Hobbs 1,054,052 votes. That's enough to put her 150 votes ahead of Republican Steve Gaynor out of 2.1 million votes tallied in that race.

If the trends hold, that means Democrats, who have not held statewide office in Arizona for years, actually could win four of the races.

The new numbers also show that Democrat Kathy Hoffman continues to build her lead over Frank Riggs for superintendent of public instruction. She now has an edge of more than 47,000 votes.

Democrat Sandra Kennedy remains ahead of both Republicans Justin Olson and Rodney Glassman in the race for the two open seats on the Arizona Corporation Commission. But if the current patterns hold, Olson, appointed last year, will get a four-year term of his own as Democrat Kiana Sears continues to trail in fourth place.

But in the race most people are watching, Democrat Kyrsten Sinema now holds on to a lead of nearly 33,000 votes in the bid to replace retiring U.S. Sen. Jeff Flake in the U.S. Senate. Her edge just a day earlier over Republican Martha McSally was only around 30,000.

McSally has been claiming for days that the tide will turn based on her belief that the early ballots cast at the last minute are more likely to have come from Republicans.

There is some indication of a small uptick in GOP ballots.

But time may be running out, for McSally, Riggs and Glassman.

Maricopa County reports it is down to the last 162,000 votes to be counted. And that means the GOP candidates will need to turn around a trend that has so far produced more votes in the state's largest county for the three Democrats - and even for Hobbs - than their Republican foes.

Arizona law specifically authorizes county recorders to establish procedures to vote for anyone who has an emergency between 5 p.m. on the Friday preceding the election and 5 p.m. the following Monday. But state GOP officials are charging that Fontes acted illegally as there was no actual emergency.

The law, however, has no such requirement. Instead, it defines "emergency" as "any unforeseen circumstances that would prevent the elector from voting at the polls."

Fontes, appearing Sunday on KPNX-TV, said election officials from other counties have been allowing emergency voting "for decades." And he rejected arguments that he should force those seeking to vote at the centers to prove they have some legitimate reason to seek special treatment.

"It's not my business what your emergency is," Fontes said.

"I've got HIPPA laws that prevent me from asking," he said, referring to the federal Health Insurance Portability and Accountability Act of 1996 which has various provisions designed to protect the unauthorized release of anyone's medical condition.

Fontes' claim he cannot ask voters for an explanation hews closely to the position of F. Ann Rodriguez, his Pima County counterpart.

"If the voters say 'it's an emergency,' we open it up and they vote," she said, saying she's not "judge and jury" over the matter.

Fontes also disputed charges that he deliberately set up these emergency centers in areas designed to benefit Democrats.

He acknowledged there were two in the largely Democratic West Valley area, one in Avondale and a second in Tolleson set up specifically at the request of the city mayor and the county supervisor who serves that area. But Fontes said there also were emergency voting locations in Scottsdale and Mesa as well as the county offices in downtown Phoenix.

But all the fuss about the emergency voting centers - and the possibility that Republicans may sue - may have little actual impact. Murphy Hebert, a spokeswoman for Fontes, said fewer than 3,000 ballots were cast at the emergency centers, unlikely enough to affect any of the statewide races.

Calvin Moore, spokesman for the National Republican Senatorial Committee that is pushing to get McSally elected, has sought to undermine Fontes' credibility in other ways.

He said that before Fontes, an attorney before was elected county recorder in 2016 he "has an incredibly unscrupulous history of defending narco-terrorists" and that one of his clients was involved in the Fast and Furious investigation where federal agents sought to catch gun-runners.

There are other efforts aimed at discrediting Fontes.

On Sunday, calls were going out to homes in Maricopa County saying Fontes was allowing the election "`to be stolen" and offering to connect the recipient of the call to the local county supervisor in a bid to have the board somehow exercise some control over him, something that likely is legally questionable.

When asked to explain who is sponsoring the calls, the woman at the other end, who clearly was in a room with others, responded only that it was "concerned citizens." When questioned who actually was behind the calls, the response was, "thank you for your time," and hanging up.

The number on the caller ID proved to be fake. A spokeswoman for the Arizona Republican Party did not respond to inquiries about whether it is the source of the calls.