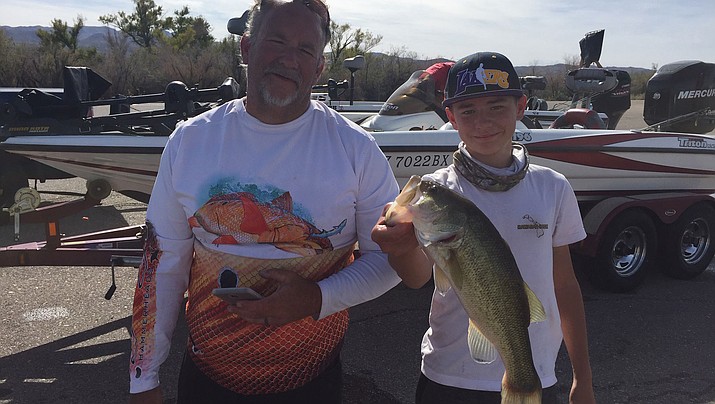 ALAMO LAKE – The team of Greg Parker and Eric Wolsey bested five other teams to win the Kingman Bass Club’s 2018 Fish Off. Even though the weather was nice, the fishing was tough. Parker-Wolsey had a two-day total of only 9.11 pounds, which is about half the weight a normal two-day tournament produces.

Second place was won by the father-son team of Dave Hilton and his father, who despite having the lead after Day 1, finished up with 8.87 pounds.

Third place was won by Chris Morris and Anthony Tatzel, who had the only five-fish limit of the tournament. Their two-day total was 8.22 pounds.

As part of the event, the club had a regular tournament that was won by the father-son team of Charlie and Doniphan Schmidt. Charlie Schmidt had the big fish for the tournament, a lunker that weighed 4.87 pounds.

On Sunday, Parker and Wolsey had the big bass of the day, a largemouth that weighed 3.95 pounds.