Hobbs getting closer and closer to Secretary of State victory 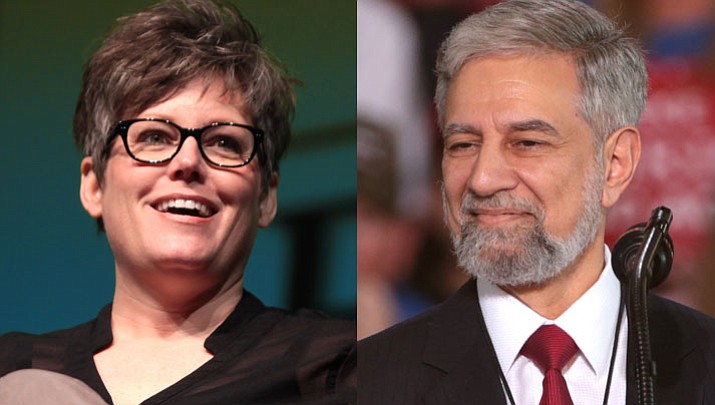 PHOENIX – Katie Hobbs is going to be Arizona's next secretary of state – and a heartbeat away from governor – absent a sudden and unlikely last-minute burst of Republican votes from Maricopa County.

There are still about 92,000 ballots yet to be counted.

About 4,000 of those are from largely Democratic Pima County. Given what has been the trend there, Hobbs is likely to pick up 60 percent of those.

Gaynor has outpolled Hobbs in Yuma County. But state election officials report there are only 265 ballots left to be counted there.

That leaves about 85,000 of those from Maricopa County.

To make up the difference, Gaynor would need to pick up more than 55 percent of those outstanding ballots. It looks tough for him, as the record to date has shown Hobbs gaining slightly more Maricopa votes each time than her GOP foe.

There was no immediate comment from Gaynor. A campaign aide said the candidate "is on a previously scheduled trip and won't be reachable until he returns sometime tomorrow.''

Hobbs, first elected to the Legislature in 2010 and currently the Senate minority leader, waged a campaign similar to the successful effort of fellow Democrat Kyrsten Sinema in her winning bid for U.S. Senate, stressing her ability to work with Republicans.

In fact, one of Hobbs' TV ads shows her shaking hands with Republican Gov. Doug Ducey after he signed bipartisan legislation to deal with the state's opioid crisis. And Ducey also publicly credited Hobbs with getting him to promise to fully fund the processing of all untested rape kits.

Gaynor, a political neophyte who defeated incumbent Michele Reagan in the GOP primary, made a point of saying he "supports the policies and achievements of the Trump administration,'' ranging from appointing judges who would not make laws and "challenging the status quo in troubled foreign relationships such as with Iran, North Korea and China.''

On paper, the office is largely administrative.

It's most visible duty is oversight of state elections. But the actual conduct of the vote and the tallying is done at the county level, albeit under rules the secretary of state adopts with the approval of the attorney general.

The agency has other responsibilities, including regulating notaries, keeping track of telephone solicitors, registering trade names and being a central place for individuals to file "advanced directives.''

But what could be the most significant part of the job involves waiting – and being available – should the governor die, quit or otherwise be removed from office.

Unlike many other states, Arizona does not have a lieutenant governor. That puts the secretary of state first in line of succession, a process that has played out multiple times in the past few decades.

Potentially more significant, there is no requirement the person elected to this spot be of the same party or share the political philosophy of whoever he or she replaces.

That's precisely what occurred in 2009 when Democrat Janet Napolitano quit to take a job in the Obama administration. That elevated Republican Jan Brewer to the post.

Sometimes the transitions are less voluntary.

Republican Fife Symington had to quit in 1997 after being convicted in federal court on criminal fraud charges. That conviction was later overturned by a federal appeals court and he was not retried after being pardoned by President Clinton. But by that time it was too late to reclaim the office that had been assumed by fellow Republican Jane Hull.

Also leaving, and not by his own accord, was Republican Evan Mecham who was impeached and convicted in 1988. That put Secretary of State Rose Mofford, a Democrat, into the governor's office.

And when Democrat Raul Castro quit after being offered the job as ambassador to Argentina in 1977 by President Carter, he was succeeded by Wesley Bolin.

As it turned out, Bolin died after less than a year in office.

Under normal circumstances the job would have gone to the secretary of state. That was Mofford whom Bolin appointed to replace him.

But because Mofford had never been elected to that office, the line of succession went to the next in line: Attorney General Bruce Babbitt.

As attorney general, Babbitt, a Democrat, had been contemplating a run in 1980 for U.S. Senate against incumbent Republican Barry Goldwater. But once Babbitt found himself governor he decided to keep the job, winning a full four-year term in in 1978 and was reelected in 1982.