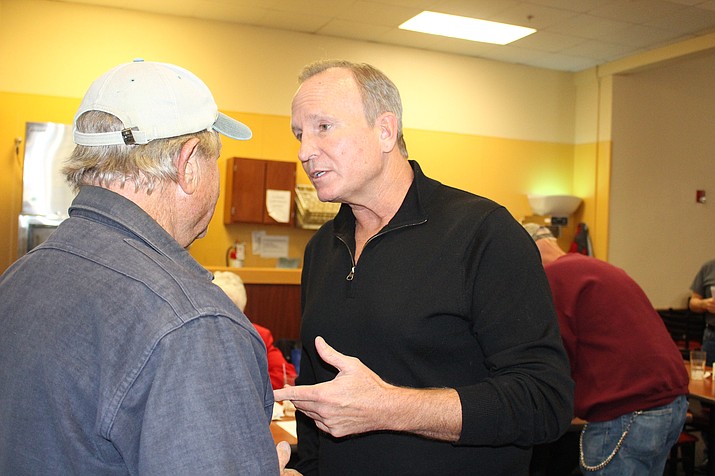 John Gall, Realtor and president of Arizona Land and Water Resources, spoke to the group on behalf of pistachio farmers about the economic benefits of nut farming in the greater Kingman area. (Photo by Hubble Ray Smith/ Daily Miner)

KINGMAN – Residents of Mohave County relish living in the land of the free with minimal government regulation, but now they’re calling for restrictions and monitoring of agricultural water usage after farmers drilled more than 200 wells in the Red Lake area.

It’s a tricky balance between limiting water use as groundwater supply continues to be depleted and historic laws that give property owners the right to drill for water on their land, state Rep. Gina Cobb said Wednesday at the Mohave Republican Forum.

“We started with hay farmers and then we saw (Jim) Rhodes come in and everyone’s hair stood up,” Cobb said about the Las Vegas developer who purchased some 20,000 acres in Mohave County to grow alfalfa, which requires intensive irrigation.

The City of Kingman is working with the U.S. Geological Survey to update a study of groundwater supply and recharge from a few years ago, but the county and state also needs to play a role, she said.

At the risk of being “tarred and feathered,” John Gall, Realtor and president of Arizona Land and Water Resources, spoke to the group on behalf of pistachio farmers about the economic benefits of nut farming in the greater Kingman area.

The pistachio industry is relatively young in the United States, growing production from 1.5 million pounds with the first commercial crop in 1976 to 551 million pounds in 2012. Nearly all of it comes from 250,000 acres planted in California’s San Joaquin Valley.

Gall said 10,000 acres of pistachios in Mohave County would generate gross sales of $70 million a year, create more than 400 permanent jobs and provide an economic benefit of $44.4 million a year.

Farmers are using the latest technology and best practices to farm in Mohave County, Gall said. They’re looking at using effluent water as their only option to augment groundwater supply.

“They’ve been growing more productive trees that use less water,” he said. “They’re mapping water in the soil. Delivery of water is expensive. Farmers have to factor that in, so they’re always looking to maximize that with better irrigation.”

Jamie Kelley, legal counsel for Mohave County Water Authority, said Kingman and Mohave County have serious issues with aquifers being depleted and no way to stop it.

The county decided not to allow the Arizona Department of Water Resources to establish an Active Management Area, which is subject to regulation pursuant to the state’s groundwater code. Those areas are in Prescott, Phoenix, Pinal, Tucson and Santa Cruz.

The people didn’t want to open the door for regulation, Kelley said.

Now they fear that Mohave County could end up like Cochise County, where wells are drying up and pumping sand, but they have no representation, she said.

“You don’t have surface water. All you have is groundwater,” Kelley told more than 50 people attending the forum at Golden Corral restaurant. “If I was on the City Council, I would reach out to purchase reclaimed water. The City needs to get on board now.”

She described the state’s Drought Contingency Plan as a “bridge to a drier future and that’s exactly where we are.”

Desert almond farmers are staking out water rights in Mohave County
In the midst of a drought, there is no stopping farmers from dipping deep into wells
Pistachio trees love it in Kingman, but protecting aquifer is a concern
Water worries resurface as Kingman nut farm proceeds
Forum to address economic development, water