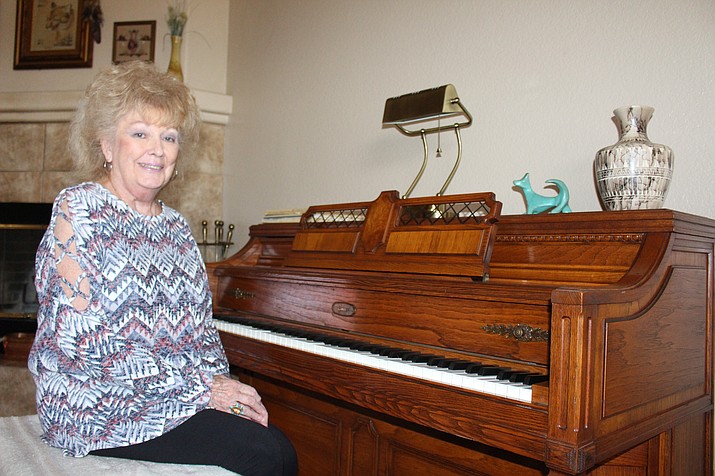 Sue Wilkin sits at the piano at her home in Valle Vista. She was elected to the Northern Arizona Consolidate Fire District board of governors on Nov. 6, returning to her former position after being forced to resign for conflict-of-interest charges. (Photo by Hubble Ray Smith/Daily Miner)

Sue Wilkin feels vindicated with her re-election to the Northern Arizona Consolidated Fire District governing board after being forced to resign over a conflict-of-interest charge that she plea bargained to a misdemeanor.

As clerk of the board in 2017, she signed and delivered a $1,357 check to pay for diagnostic work on one of the district’s fire engines at a shop owned by former board member Vic Riccardi in Valle Vista.

Riccardi stubbornly refused to give in to Mohave County prosecutors, and spent a couple of weeks in jail during Christmas and New Year’s before finally pleading guilty to two counts of conflict of interest.

Wilkin agreed to a misdemeanor for misuse of funds and avoided jail time and probation, but had to vacate her position on the board.

Wilkin picked up 2,081 votes in the Nov. 6 general election, joining John Bryant (2,611 votes) as the two elected board members. Bryant was appointed to the board in July to fill the vacancy of Chairwoman Patti Lewis, who resigned after the appointments of Carl Hays and Eric Berg.

Hays has since resigned from the board after being found in court to not have a legal residence in the district.

“Apparently there are enough people who believe in me and got me elected to the board,” Wilkin said. “They didn’t believe everything they read in the newspaper and heard on the radio.”

Wilkin, 78, has lived in Valle Vista for 26 years and has been involved with the fire district for 12 years, serving as board secretary for five years and as president for one year.

Originally from Sterling, Colorado, Wilkin attended Mesa City College and Arizona State University and worked in the medical field for 18 years. She owned a medical clinic in Iraq in the early 1980s. She was also a licensed Realtor for 24 years and volunteered full-time at the Mohave County Animal Shelter.

Wilkin said she was a big supporter of Valle Vista Fire District when Riccardi was fire chief, and he wanted to leave the district in good hands when he retired.

“Some people were against the merger, but there were advantages,” Wilkin said. “Now (former NACFD attorney) Charlotte Wells has stated that the merger was not legal.”

Wilkins has to feel like the lone wolf on the NACFD board, facing adversaries Jim Bailey and Mike Collins and their appointees, Berg and Bryant.

“I’m severely outnumbered at the moment, but I don’t expect it to stay that way,” she said. “We’ll see how the legal issues work out.”

Nichole Berry, former office administrator at NACFD, has filed a complaint with the Equal Employment Opportunity Board over being fired for not relinquishing the keys to Eder’s office to Bailey, but he didn’t have the authority to fire her.

Eder has filed a claim of wrongful termination, and two citizens have filed a claim to nullify all board action since April due to Hays’ illegal residence, which would include the firing of Eder.

“Time will tell,” Wilkins said. “I don’t know, but I’m willing to give it my best shot. Doing nothing won’t work. Sitting on your hands won’t get anything done.”

She added, “I’m working for the community to do whatever I can to improve service to the community by the fire district. These people have had nobody to go to.”