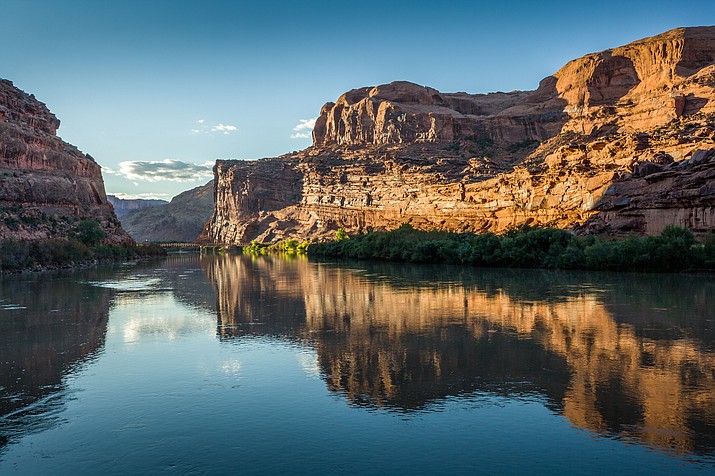 A survey of decision-makers by the group at the University of Colorado concludes that the president who takes office in 2017 could see cuts in Colorado River water supplies to Arizona and Nevada as soon as January 2018. (Adobe Images)

FLAGSTAFF (AP) – A major Colorado River water user has proposed an interim plan for Arizona as the state faces a looming deadline to manage expected shortages. The Central Arizona Project board said its proposal could jumpstart talks after previous ones failed to gain consensus among water users.

The agency wants to draw up to 400,000 acre-feet of water it stored in Lake Mead and 50,000 acre-feet in Lake Pleasant, and implement a $60 million conservation program to lessen the burden of shortages on mainly farmers and developers. Another program would help improve groundwater systems but doesn’t have a price tag.

The agency said the proposal theoretically would result in a net benefit to Lake Mead because it could not pull out as much water under regular deliveries in shortages, stabilizing the lake before it reaches a level where no one could get any water.

Arizona water users had a mixed response to the proposal presented at a board meeting Thursday. It covers only three years of a required seven-year, multistate plan to manage the shrinking Colorado River.

Arizona Gov. Doug Ducey said this week that any drought contingency plan has to align with four principles, one of which is to build on efforts to prop up the lake that determines how much water can be sent to Arizona, Nevada and California from the river’s lower basin.

U.S. Bureau of Reclamation Commissioner Brenda Burman has said she wants a plan from the seven states that relies on the river by the end of the year. The upper basin states – Colorado, New Mexico, Utah and Wyoming – are working on a separate plan.

“Reclamation recognizes that time is short and that the negotiations in Arizona are at a critical stage,” said agency spokeswoman Patti Aaron. “Reclamation remains cautiously optimistic that the parties will find a path forward.”

An Arizona drought contingency committee is scheduled to meet later this month to consider the Central Arizona Project proposal and any others. The Colorado River Indian Tribes recently offered 50,000 acre-feet of water to help reach agreement, with strings attached.

“We have been working with the state for the past two years to help protect the river and to help the State of Arizona to deal with the drought and shortages,” CRIT Chairman Dennis Patch said in the statement. “The proposal we delivered today puts real numbers to that offer that are significant to getting the necessary approvals for the Drought Contingency Plan.”

CRIT is currently allotted 600,000 acre-feet of water per year. Under the proposal sent out last week, CRIT would lease the portion of its allotment for three years beginning in 2020 for $250 per acre foot.

“The longer we argue and delay, the more we risk,” she said. “Time is our enemy. We are facing a common crisis and will all have to take a hit or face the judgment of history.”

A nearly two-decade-long drought has drained the river’s two largest reservoirs, Lake Mead and Lake Powell, to alarmingly low levels. The Bureau of Reclamation puts the chances of a shortage in water deliveries to the lower basin at more than 50 percent in 2020. Arizona, Nevada and Mexico would be hit first.

The drought contingency plan would mean deeper cuts but it also would spread the shortages more widely, eventually looping in California, which wouldn’t lose any water under the current guidelines.

Arizona has agreed to overall figures for the drought plan but determining who contributes what within the state has been contentious.

The Gila River Indian Community, which has the largest share of river water delivered through Central Arizona Project canals, said any attempt to lessen the blow of shortages under a drought plan has to be equitable.

Central Arizona farmers did not expect to fully lose Colorado River water until 2030. They would be hardest hit as is, legally, and are looking for help.

Dan Thelander, whose family farms 5,000 acres in Pinal County, said he will have to fallow 2,000 acres under the Central Arizona Project proposal.

“This is a tough pill to swallow, but we understand it,” he said at Thursday’s meeting. “We’re ready to do it.”