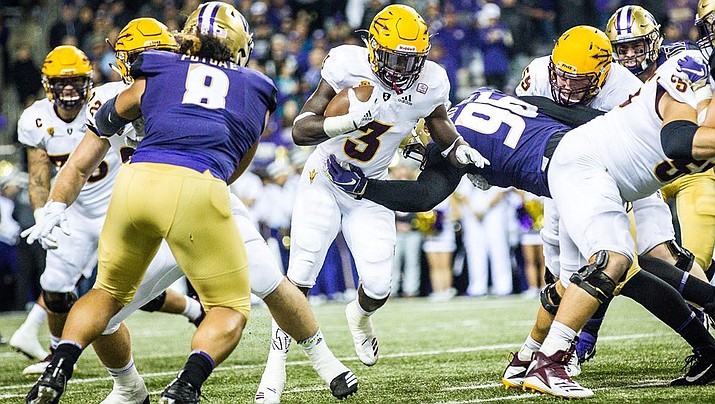 Benjamin burst up the middle, cut outside and finished off his third touchdown of the game to put the Sun Devils up 41-40 with 3:08 left.

The Wildcats got the ball back and marched down the field, but Josh Pollack, who made four field goals, pushed a 45-yard attempt wide right with 11 seconds left.

Wilkins threw for 265 yards and a TD for the Sun Devils, who denied Arizona's bid to become bowl eligible in coach Kevin Sumlin's first season.

Tate threw for 282 yards and three touchdowns, and Taylor had 144 yards on 28 carries.

Arizona State clinched bowl eligibility with a win over UCLA and missed a chance to clinch the Pac-12 South by losing to Oregon last week. The Wildcats' bid fell flat in a blowout loss to No. 7 Washington State.

Left with one final shot at a bowl game, Arizona jumped on its biggest rival early, racking up yards in good-sized chunks.

Tate hit Ellison on a 28-yard touchdown in the first quarter and Shawn Poindexter scaled over ASU cornerback Kobe Williams in the end zone for a 23-yard score.

The Wildcats had to settle for Pollack field goals on three trips into the red zone, though, including a 36-yarder on the final play of the first half to put Arizona up 22-14.

Wilkins hit Brandon Aiyuk on a 58-yard scoring pass and Benjamin bulled his way in for a 10-yard TD to keep the Sun Devils within reach.

Arizona started quickly in the second half as well.

PJ Johnson tackled Benjamin in the end zone for a safety, then Taylor returned the kickoff 66 yard to set up Pollack's fourth field goal.

Benjamin scored on a 14-yard run, but Gary Brightwell answered with a 35-yard scoring run. Tate then hit Ellison on a jump pass for an 8-yard score to put the Wildcats up 40-21.

The Sun Devils defense struggled all game before coming up with the biggest plays when they needed them most.

The Wildcats had bowl eligibility within their grasp, only to let it slip through in the fourth quarter. This one will hurt.