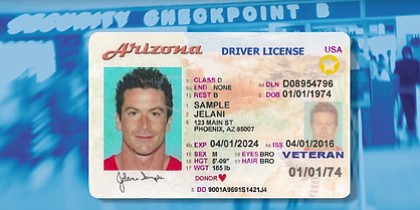 As many as 150,000 Arizonans have already done it, and anyone planning to travel by air after 2020 probably should consider getting a new state Travel ID too.

As of Oct. 1, 2020, having a Travel ID that meets federal TSA (Transportation Security Administration) requirements will be essential for travelers boarding an Arizona flight to another U.S. destination.

Currently, standard Arizona driver licenses are adequate identification for flying to destinations within the United States.

But that will change in less than two years, when travelers will be required to show either a special Arizona Travel ID or a passport in order to board a domestic flight.

That means that Arizona residents who foresee the need to fly within the U.S. in the next several years – be it to a wedding, a family vacation, on business, or for a funeral – may want to take action in the next year and a half.

Doug Nick, the Arizona Department of Transportation (ADOT) Assistant Communications Director for Customer Outreach, noted that thousands of Arizona residents have already responded to the call for new Travel IDs.

“There are approximately 150,000 Travel IDs that have been issued since we began in 2015,” Nick said, noting that some of those may have since expired due to a person leaving the state or passing away.

Just in the past month – after a round of email notices went out in October – ADOT issued 20,491 travel IDs.

Nick explained that the new ID requirement dates back to 2005 when Congress passed the Real ID Act, which set federal standards for security, authentication, and issuance procedures for state driver licenses.

Then, in 2015, the Arizona State Legislature passed its own law that required state residents to be proactive on their travel identification. Nick said Arizona is one of 37 states to decide that standard driver licenses would not be automatically compliant with the federal law.

ADOT’s email notices ask license holders the question: “Will your license fly?” It goes on to state: “If you don’t have a federally-accepted form of ID as of Oct. 1, 2020, the federal TSA may not allow you to get on your flight.”

The email urges state drivers to “make an appointment now at ServiceArizona.com to get your Travel ID.”

The email notices have been relatively effective in getting out the word.

In March 2018, Nick said, just 5 percent of licenses issued by the Motor Vehicle Services were Travel IDs. That jumped to almost 17 percent in May, after the first round of ADOT’s email reminders.

The percentage of Travel IDs then leveled off to about 14 percent through the summer, and jumped again to 22.6 percent of all licenses issued in October, after the second round of emails.

Nick stresses that getting a new Arizona driver license is not required – especially for those who do not plan to travel by air.

In addition, holders of passports do not need a new AZ Travel ID, Nick said, “If you’re comfortable taking a passport on every flight you take.”

He also clarified that the state Travel ID will not take the place of a passport. That document will still be required for international travel.

The new Travel IDs will differ from standard Arizona driver licenses on one significant point: They will be good for only eight years.

Currently, Arizona licenses expire on a driver’s 65th birthday. Until then, drivers need to update their license photos just every 12 years. Then, starting at age 65, drivers must renew their standard licenses every five years, with a vision test each time.

For residents who do opt to get a Travel ID now, ADOT has a number of suggestions.

First of all, Nick said, “We recommend that people make an appointment” – at www.servicearizona.com.

And when they show up for the appointment, applicants must provide several documents:

• Two documents proving Arizona residency, such as a utility bill; a mortgage document; a home or apartment rental agreement; or a credit card/bank statement.

Nick said the new Travel IDs look similar to the standard Arizona driver licenses, but have a gold star in the upper right-hand corner.