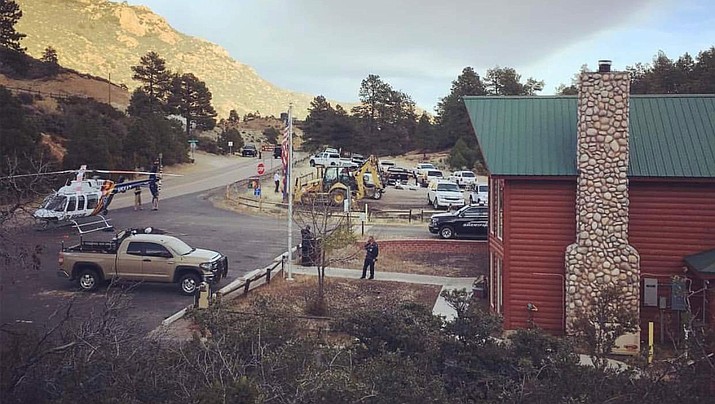 Teams from many agencies assisted in the recovery of three bodies last week in the Hualapai Mountains. (MCSO Search and Rescue photo)

KINGMAN – On Wednesday, the Mohave County Sheriff’s Office Search and Rescue technical rope rescue team recovered the bodies of three motorists missing since Nov. 17 from a canyon approximately 500 feet below the road.

The rescue team used high-angle lowering and raising technical rope recovery to retrieve the bodies of 66-year-old James Keel, Nancy Walker, 62, and Ebert Johnson, 61. Search and Rescue found the vehicle around 1:30 p.m. Tuesday in an area of steep and rugged terrain.

Investigators believe the driver lost control of the vehicle and it left the roadway, landing several hundred feet into a canyon. No foul play is suspected, and the investigation is ongoing. The three were taken to the Medical Examiner’s Office.

The search area, more than 180 square miles, was in the eastern, northern, and southern slopes of the Hualapai Mountains. It extended north to Interstate 40 and east to Highway 93. More than 8,000 miles of primitive roads were covered by ground teams during the search.