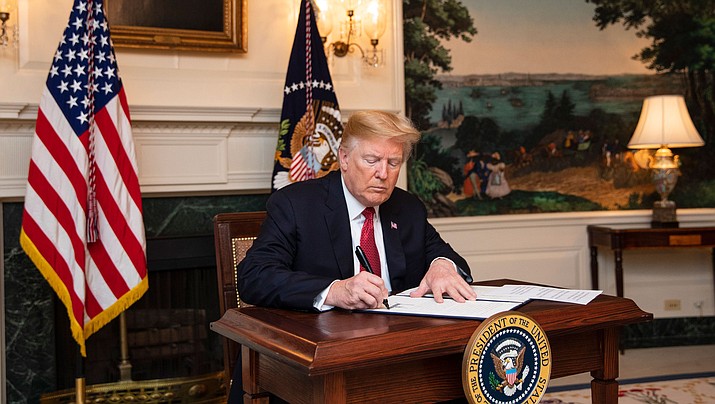 President Donald Trump is seeking $5 billion for the wall, which he made a centerpiece of his 2016 campaign and said Mexico would pay for, and he is stepping up pressure on Congress to provide it. Trump said he would “totally be willing” to shut down the government if he doesn’t receive the wall money he wants. (Official White House Photo by Joyce N. Boghosian)

WASHINGTON – With a partial government shutdown possible on Dec. 7, President Donald Trump has met with Republican leaders to hash out a spending plan that includes money for Trump's proposed border wall with Mexico.

Trump is seeking $5 billion for the wall, which he made a centerpiece of his 2016 campaign and said Mexico would pay for, and he is stepping up pressure on Congress to provide it. Trump said he would "totally be willing" to shut down the government if he doesn't receive the wall money he wants.

House Republicans approved $5 billion for Trump's wall in a key committee, but a bipartisan bill in the Senate allocates just $1.6 billion for the border.

House Majority Leader Kevin McCarthy, R-Calif., called Tuesday's White House meeting "very productive" and said Trump "is very solid with where he wants to go and what he needs to have a secure border."

House Majority Whip Steve Scalise, R-La., took a hard line on the negotiations, saying Democrats will soon face a crucial question: "Are they going to shut down the government because they don't want to keep America safe?"

Trump said he is considering a backup plan if Congress rejects his demand for the $5 billion, possibly including the continued use of troops and razor wire to prevent migrants from entering the country. He told The Washington Post that if he doesn't get the money, there are other ways he could get it done.

But he has expressed impatience. "I am firm," he said in an interview published Wednesday in Politico.

"I don't do anything ... just for political gain," Trump said. "But I will tell you, politically speaking, that issue is a total winner. People look at the border, they look at the rush to the police, they look at the rock throwers and really hurting three people, three very brave border patrol folks – I think that it's a tremendous issue, but much more importantly, is really needed. So, we have to have border security."

With Republicans in control of the presidency, the House and the Senate, "a shutdown is on their back," Schumer said Tuesday. "Stick to the $1.6 billion."

Democrats and GOP leaders struck a deal earlier this year to fund nearly three-fourths of the government into next year. Left undone, however, is funding for the Department of Homeland Security, which oversees the border, and a few other agencies. They're now running on stopgap funds set to expire Dec. 7.

"I didn't know Robert Mueller needed protection," McCarthy told reporters, adding that there's "nothing out there" for Mueller or Democrats to fear from Trump or his administration. "But I do know the southern end of our country needs protection."

McCarthy, whose party lost more than three dozen House seats in the midterm elections earlier this month, urged Democrats to work with Republicans on the wall and other legislation, including a long-stalled farm bill, a new tax cut package and criminal justice reform.

"The election is over. Let's put people before politics," McCarthy said. "We've got a problem before us. Let's solve that problem."

Schumer said Democrats support strong border security and believe that $1.6 billion for border security, including physical barriers and technology along the U.S. southern border, "is the right way to go."

White House spokesman Hogan Gidley said Trump and GOP leaders discussed a range of legislative priorities, including the California wildfires, the farm bill and "the great need for border security at this crucial time," as well as prison reform and the budget. The group also talked about Monday's announcement by General Motors that it will shutter five plants and slash 14,000 jobs in North America, Gidley said.

Kabul police spokesman Basir Mujahid said the target of the attack was a security company called G4S. He had no details on the company but the website of a multinational security company named G4S has London contact information.

The Taliban view the U.S.-backed government in Kabul as a dysfunctional Western puppet and have refused repeated offers to negotiate with it. They carry out near-daily attacks on Afghan security forces.

U.S. and NATO troops formally concluded their combat mission in Afghanistan in 2014, but still provide close support to Afghan forces and carry out counterterrorism operations. Some 15,000 American forces are currently serving in Afghanistan.

Zabihullah Mujahid, spokesman for the Taliban, claimed responsibility for Wednesday’s attack in a statement posted on Twitter.

Attahullah Afghan, provincial council head, said most of the casualties in Helmand — which included men, women and children — occurred in an airstrike that hit a house Tuesday night during military operations in the province, a Taliban heartland.

A child who was wounded in the attack was brought to a hospital in the provincial capital of Lashkar Gah, he said.

A statement from governor’s office in Helmand confirmed that 16 Taliban insurgents were killed and said that an investigation was underway to determine the number of civilian casualties.

It said the militants had stockpiled ammunition in the area of the operation, which could have caused civilian casualties. There was also a car packed with explosives that ignited during the strike, the statement added.

Abdul Wadod Popul, a lawmaker from Helmand, also confirmed the civilian casualties. “The area is under Taliban’s control and is very difficult to get a precise number of casualties,” he said in Kabul.

Qari Yusouf Ahmadi, a Taliban spokesman, claimed in a statement sent to the media that all the victims were civilians.

Telephone lines with Helmand were cut on Wednesday and it was not immediately possible to reach local officials and civilians there. Also, it was not clear if the operation was being conducted exclusively by Afghan forces or whether NATO forces were there to support the Afghans.

The Helmand fighting came as Afghan President Ashraf Ghani was in Geneva, attending a two-day U.N.-backed conference that ends Wednesday and that is focused on development, peace and security in the war-battered country.