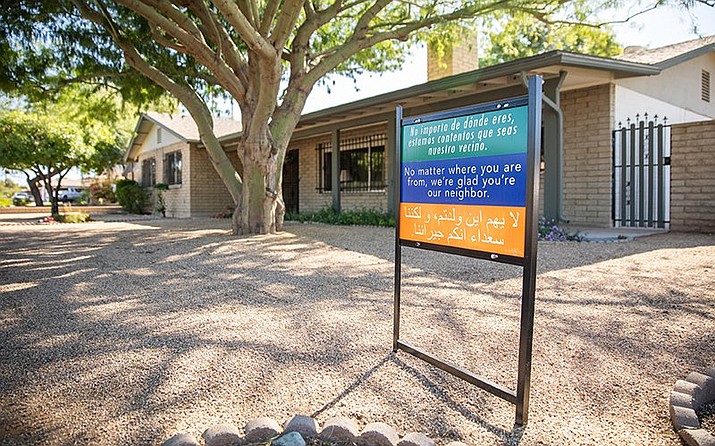 Hospitality Service Center has hosted refugees from the Democratic Republic of Congo at its Glendale guesthouse. (Photo by Celisse Jones/Cronkite News)

PHOENIX – In a year where the number of refugees and displaced people worldwide has reached record highs, those who wish to help have a new way of doing so through Airbnb. The peer-to-peer house-sharing company is offering temporary housing through a program called Open Homes, which now is available in Phoenix.

Hospitality Service Center in Glendale is a faith based volunteer group that helps in various efforts throughout the community. Jeannette Slater is the guesthouse manager at HSC; she also hosted a family from the Democratic Republic of Congo this July through Open Homes.

“These people need a place to land just for a week or two and for it to be safe. I don’t think we understand how much our homes are not just a financial resource to us, but it’s a resource of safety and of peace,” Slater said. “That resource is huge, and so I think that’s always going to be needed for refugees and there will always be refugees.”

The idea behind the program arose after Superstorm Sandy battered the East Coast in 2012 when a host in New York reached out to Airbnb about opening her home to those affected by the natural disaster.

Kim Rubey, head of social impact at Airbnb, said the company saw it as a no-brainer and took action to help those who had lost their homes, at no cost to them.

“Since then, we’ve activated hundreds of times all over the world in the wake of disasters, but a few years ago we realized we could turn it from something that was reactive in nature and in response to things and into something on going and proactive,” Rubey said.

Open Homes, which officially launched in June, aims to provide short term housing to refugees and evacuees over the next five years. The goal is to help 100,000 people in need around the world, according to the company’s website.

Airbnb also has partnered in Arizona with the International Rescue Committee, a global non-governmental organization that provides humanitarian aid, relief and development opportunities for refugees in 40 countries; it also resettles refugees in 28 U.S. states.

“Here in Phoenix, we help resettle refugees from around the world,” said Stanford Prescott, community engagement coordinator for the International Rescue Committee. “When they first arrive in Phoenix, we help them find housing, employment, health care and education. Over the long term, we also help with economic opportunity programs as well as immigration programs.”

Slater said the committee reached out to HSC this summer to house refugees from the Democratic Republic of Congo. Slater said she knows all too well the stigma that can come from being labeled as a refugee.

“These are not criminals, these are not people that are fleeing their country because they’re going to be put in jail because they’ve done wrong,” she said. “They’re fleeing violence and they are looking for a safe place to land. I think that probably the biggest hurdle to get over is in people’s minds who the refugees are and is it safe to have them in my home.”

The Open Homes program arose after Superstorm Sandy battered the East Coast in 2012 when a host in New York reached out to Airbnb about opening her home to those affected by the natural disaster. (Photo by Celisse Jones/Cronkite News)

The eight member Congolese family that Slater hosted was welcomed with open arms by the community. One neighbor, she said, bought a nearby home and rented it to the family.

“Now they live just down the street and they come to our church and are a part of our community,” Slater said.

As of September 2018, Airbnb has been able to house more than 15,000 people through Open Homes, according to its website.

Rubey, the social impact director at Airbnb, said the company has chosen to focus on helping with global issues since it operates in all parts of the world. For example, with the recent wildfires in Southern California, 2,000 people have opened their homes to those who have been affected by the flames.

Slater says the service she is able to provide to these people is a reward itself.

“These people come scared, they come empty-handed, and what a privilege to provide a loving place that they can plant themselves for a while.”

Event in Tucson reveals what it’s like to Walk a Mile in a Refugee’s Shoes
Lots of older cities are losing population
Column | Trump correct to consider changes to our refugee policy
Ducey to Pompeo: Refugees are welcome in Arizona
US again slashing number of refugees it will accept