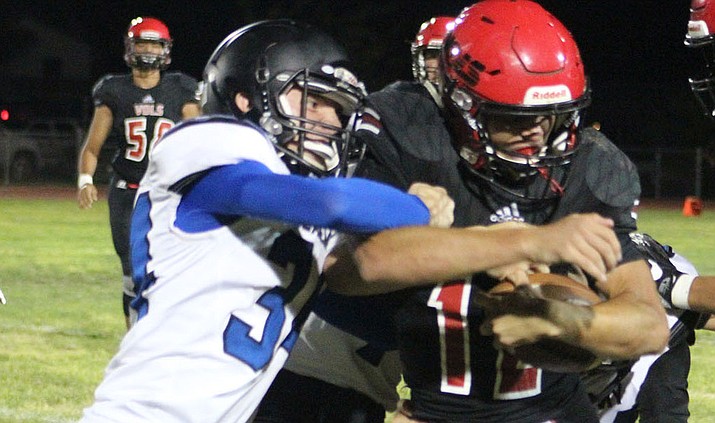 KINGMAN – Charlie Anderson entered this season willing to take on any role for the Kingman Academy High School football team – whether that be on offense or defense.

But it was a surprise when the sophomore found himself leading the Tigers as the starting quarterback last week in a 21-12 win at Chino Valley.

“Out of all the positions to play, this was probably the one that was least likely to happen,” Anderson said of quarterback. “(But) here it is.”

“It’s a tough one, no doubt,” Anderson said. “It’s a tough one no matter who we play coming in and out every week. Wickenburg is a good team, a good program. We just have to work hard.”

That confidence will no doubt go a long way and shows why Tigers head coach John Morgando believes in Anderson’s ability as a signal caller.

“He’s always been a very consistent guy for us – even since his freshman year,” Morgando said. “He shows up to everything. He does the right things. He’s in the weight room. He puts all the work in. Quarterback is a very demanding position. Not only the physical work, but all the mental work.”

And with Anderson at quarterback, former starter Dallas Edwards moves into a new role at wide receiver. The junior was Anderson’s favorite target last week with two catches for 24 yards and the duo will look to keep it rolling against the Wranglers.

“Dallas is really athletic, fast and can jump,” Morgando said. “It gives us a new element there.”

Meanwhile, Academy’s defense will look to stop a Wickenburg offense that has amassed 1,852 yards of total offense. Mike Mindnich leads the charge with 809 yards passing, 11 touchdowns and four interceptions. The senior quarterback has also racked up 446 yards rushing and five scores.

“Wickenburg is a good team,” Morgando said. “They execute well. They’re physical. They have good size, which is something we’ve been struggling against all year. But I just want to get out there and hopefully execute – do what we can do well. Minimize mistakes like we did last game. No turnovers is a great goal.”