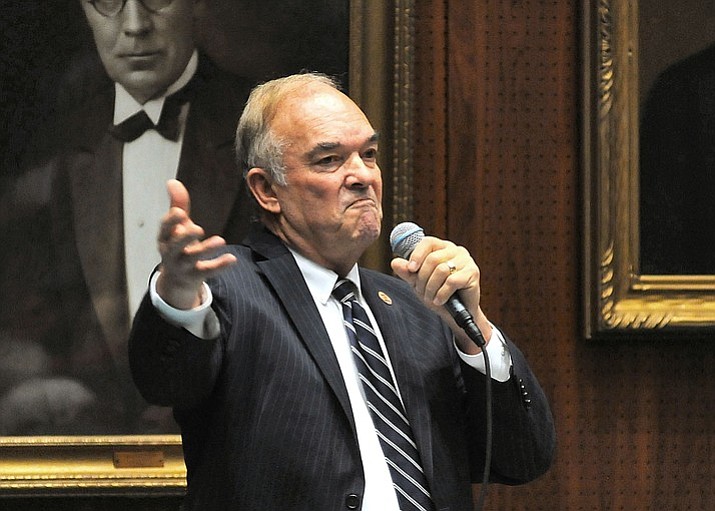 PHOENIX — Denied what he wants by attorneys hired by the state House, Don Shooter now is asking a judge to force them to cough up the entire investigative report that led to his ouster and all the documents that led to its production.

Kraig Marton, Shooter’s attorney said in new filing in Maricopa County Superior Court that the document he wants “have a direct bearing’’ on his efforts to defend Shooter against a slander, libel, battery and negligence claims filed against his client by Rep. Michelle Ugenti-Rita. And Marton said the documents also are necessary for Shooter to pursue his counterclaim of defamation against Ugenti-Rita.

The two attorneys hired by the House to investigate allegations of sexual harassment, Craig Morgan and Lindsay Hesketh, refused to honor a subpoena Marton issued, claiming the documents are protected either as work-product or attorney-client privilege.

But Marton told Judge Bruce Cohen that while House Speaker J.D. Mesnard eventually released an 82-page report, it is clear there is much more that is being withheld that is material to the whole question of whether any of the claims in the civil lawsuit are true.

“For example, Shooter seeks the notes taken during the interviews that are summarized in the report,’’ Marton said in the new legal filings.

“He seeks all the documents given to the lawyers that led to the report,’’ Marton continued. “He seeks the identity of every person who spoke to the lawyers.’’

Shooter was expelled from the House in February on a 56-3 vote after the investigative report prepared by the outside attorneys found “credible evidence’’ that the Yuma Republican violated House policy against sexual harassment.

Mesnard originally had sought only censure. But he pushed for expulsion after Shooter sent a letter to colleagues asking they delay any action while they consider whether charges should also be brought against Ugenti-Rita, one of the women the report said Shooter harassed.

Rep. Michelle Ugenti-Rita talks with colleagues on the House floor earlier this year in the wake of the vote to oust Rep. Don Shooter on charges of sexual harassment. (Capitol Media Services file photos by Howard Fischer)

That goes to much of what Shooter wants now, the things the lawyers found but were not provided to other legislators — and that Mesnard has refused to disclose.

One of the issues is whether Ugenti-Rita was complicit in sending what the reports said were “unsolicited, sexually explicit communications’’ to someone who is believed to be a female former staff.

The report described these as “egregious and potentially unlawful acts.’’ But Brian Townsend, a former House staffer who was dating Ugenti-Rita, accepted sole responsibility for sending these out and the matter was not pursued.

Shooter contends the details of what the attorneys learned — and the pictures themselves — were in early versions of the report but excised before its release.

But there’s also something else.

Marton said that staffer had been interviewed by the House attorneys but that any information has been withheld.

“Her statements are part of what Speaker Mesnard refuses to release,’’ Marton said. “The documents sought have a direct bearing on these claims and defenses, and are necessary for the Shooters’ defense and prosecution of his counterclaim.’’

Marton said the fact that Mesnard released some of what the hired attorneys used means the speaker waived any claims of protection, either as attorney-client privilege or work product.

The objections by the hired attorneys to releasing everything they have go beyond the strict legal arguments.

In letters obtained by Capitol Media Services, Gregory Falls, who is representing the two lawyers, accused Shooter of going on a “fishing expedition’’ to get information that goes beyond what’s needed for the civil lawsuit.

Shooter has made no secret that he hopes to clear his name — or at least provide voters with a more complete picture of the issues that resulted in his ouster.

“I think there’s going to be a tremendous amount of information that will damage the credibility of my accuser and, in addition, will bolster my view of the facts,’’ Shooter told Capitol Media Services.

Whatever Shooter manages to get — if anything — will come too late to immediately salvage his political career.

After his ouster, Shooter made a bid to get elected to the state Senate. But he came in third in the three-way Republican primary.