Verbiage on ballot for Prop. 305 could cause confusion 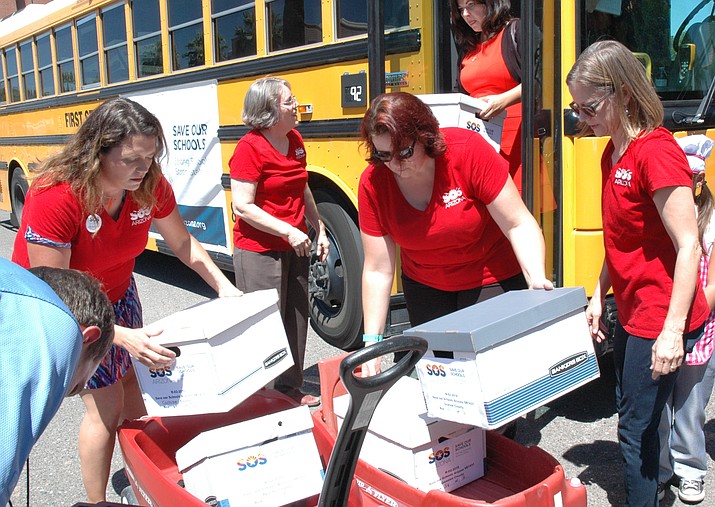 Volunteers from the Save Our Schools movement unload petitions last year to block a voucher-expansion plan approved by state lawmakers from taking effect until voters get the final say in November. (Capitol Media Services file photo by Howard Fischer)

PHOENIX – It seems a bit out of Alice in Wonderland.

The more than 100,000 people who signed petitions to put Proposition 305 on the ballot now find they have to vote against it to get what they want: repealing legislation to expand who can get vouchers of taxpayer funds to attend private and parochial schools.

The unusual situation arises because of the unusual way the measure got on the ballot in the first place: People unhappy with the Arizona Legislature put it there.

This isn’t like Proposition 127 where those who signed the petitions want to require electric utilities to get half their power from renewable sources. And signers of Proposition 126 want to constitutionally preclude future sales taxes on services.

Those who circulated petitions for Proposition 305 have a different goal: They want to overturn something already approved by the Legislature.

Until 2017, the vouchers, formally known as “empowerment scholarship accounts,’’ were restricted to those with special needs, ranging from learning disabilities to foster children, children living on reservations and those attending public schools rated D or F. About 3,500 students out of 1.1 million in public schools now get such aid.

That year lawmakers voted to remove all those restrictions. But in a political compromise, proponents agreed to limit the total number of vouchers to no more than 30,000 by 2022.

The Arizona Constitution allows any group dissatisfied with any legislative measure to refer it to voters. All it takes is the signatures of 5 percent of those who voted in the last gubernatorial race within 90 days after the end of the legislative session to put the law on “hold’’ until the next general election.

That’s what happened here. Opponents of an expanded voucher program gathered more than 110,000 signatures, far more than the 75,321 needed, and a legal challenge by voucher supporters to quash the petition drive failed.

So the voucher expansion plan is in legal limbo until at least Nov. 6.

Here’s where it gets tricky.

Proposition 305 is a referendum on what lawmakers approved. So a “yes’’ vote opposes the goal of those who put the issue on the ballot, ratifying ratifies the 2017 law and allowing the 1voucher expansion statute to take effect.

So it takes a “no’’ vote to reject the legislation – and support the referendum drive.

The “yes’’ side to expand voucher accessibility is backed by several groups which back the use of public dollars for private and religious education, including the Arizona Catholic Conference whose dioceses run schools that take children who have vouchers, and the Center for Arizona Policy. The Goldwater Institute also is in support based on its backing of the concept of “school choice.’’

But to date the pro-305 side has yet to come up with any sort of extensive campaign. In fact, the #YesForEd Committee, as of the most recent campaign finance report, had spent less than $150.

By contrast, Save Our Schools Arizona listed $311,000 in expenses.

The referendum has created a schism among parents whose children now get these vouchers.

In a statement in support of Proposition 305, Christine Accurso, a Gilbert mother, detailed how her son who has a learning disability was unable to get the services he needed either in a traditional public school or a charter school. She said only after getting a voucher is her son getting his needs met at a private school.

Leslie Contreras of Duncan said the vouchers have allowed her to purchase quality curriculum for her son, diagnosed with autism spectrum disorder and attention deficit hyperactivity disorder, “without having to worry about how I am going to pay for them.’’

Susan Edwards, in her statement in opposition, said it is precisely how vouchers meet the needs of her two children who are on the autism spectrum that voters should reject what the Legislature did.

As Edwards sees it, the vouchers finally provided some financial help for parents of children with special needs. But if anyone can get a voucher, with or without those needs – and with a 30,000 cap and no special carve-out for those for whom the program was first designed – “our children will again be placed at the back of the line.’’

She took a slap at proponents who cite the success of vouchers for special-needs children.

“Those in favor of Prop 305 are exploiting our children to crack open the funding door for private religious education,’’ Edwards wrote.

While the whole Save Our Schools campaign started out to be about vouchers, it actually has morphed into much more.

Concerns about inadequate funding of K-12 schools merged with anger about lawmakers putting additional dollars into private and parochial schools. And the referendum drive eventually gave birth to the #RedForEd movement that led to the state’s longest-ever teacher strike last spring.

Just the threat of that strike caused Gov. Doug Ducey, who originally proposed just an additional 1 percent in teacher pay, to find the funds for an additional 18 percent. Ducey committed to restoring funds taken from a special account that had financed other school needs ranging from computers and books to school buses, an account that he himself had raided his first year in office.