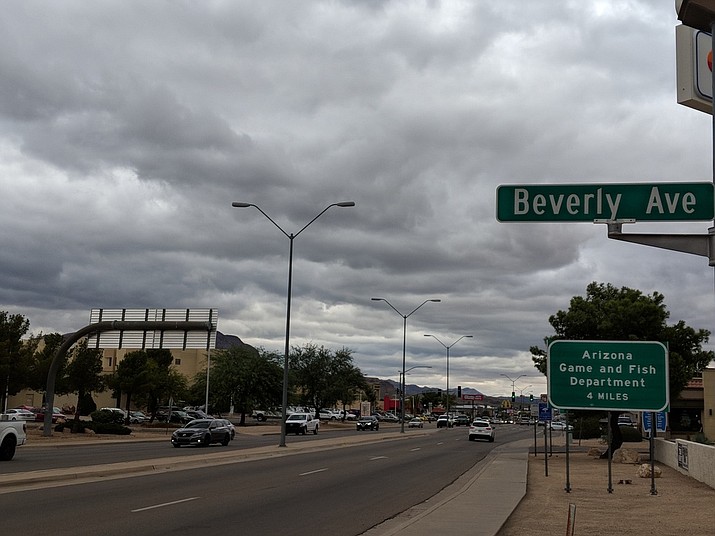 The City is looking to address traffic issues, such as congestion and distracted driving in Kingman. A primary area of concern is Stockton Hill Road. (Photo by Travis Rain/Daily Miner)

It will come to no surprise to the citizens of Kingman that a primary area of concern, that with the most traffic accidents, is Stockton Hill Road.

The two intersections with the most accidents throughout a five-year period were Stockton Hill and Airway Avenue (255), and Stockton and Sycamore Avenue (142).

At least three of the City’s top 10 intersections with the most accidents are maintained by the Arizona Department of Transportation. Those include Andy Devine Avenue and Airway Avenue, Andy Devine and Armour Avenue and W. Beale Street and Lampton Avenue.

“We’ve spoken to ADOT, and they currently don’t have any plans to address those,” Plaunty said. “But they said they’d like to sit with us and discuss some potential projects to look at those areas.”

The most common type of accident occurring at Kingman’s intersections is rear-end accidents, which Plaunty said can be attributed to driver inattention. He also noted that midday traffic speeds on Stockton Hill Road going north from about Beverly Avenue to Airway Avenue is less than 15 mph, with the 35 mph speed limit not actually being met until motorists reach Gordon Drive.

Staff is looking at flashing-yellow indicators and adding left-turn phases to signals currently without them. More difficult undertakings could include roadway widening, access control and intelligent traffic signals.

Plaunty said there could also be improvements to pedestrian access for sidewalks and bike lanes.

Reif explained that there are three root-causes to traffic accidents in Kingman: inattention to speed, vehicle traffic flow and surroundings; distractive driving from cellphone use, talking with passengers, and eating and applying makeup; and impatience.

He provided a few tips for staying focused while driving. They include keeping eyes on the road, keeping phones out of reach and on “do-not-disturb” mode, and keeping emotions in check.

Enforcement of those top 10 roadways is challenging, Reif said.

“If we make a traffic stop on Stockton Hill Road during midday traffic, we are furthering that traffic congestion,” he said.

Reif said to mitigate the issue, alongside media campaigns, the department wants to “change driver behavior.”

“It’s trying to get them to curb whatever they’re doing at the time,” he said. “Whether it be talking on their cellphone, speeding and or simply having a distraction.”

Reif concluded by saying the majority of traffic accidents wouldn’t occur if drivers would focus on the task at hand.