‘A Star Is Born’ a must see for GaGa fans 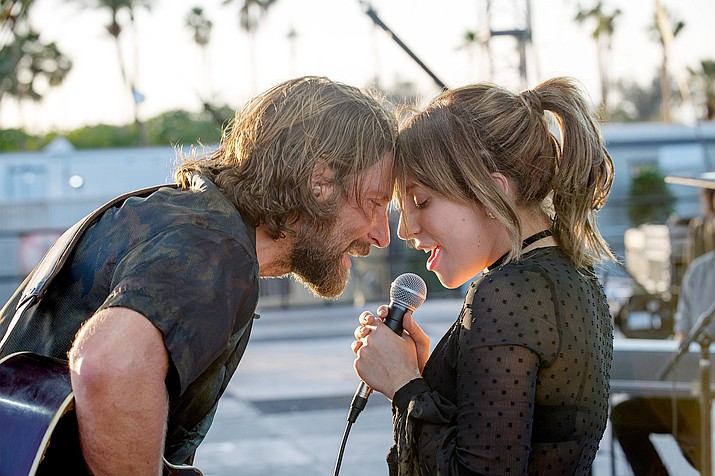 A STAR IS BORN - Official Trailer 1 by Warner Bros. Pictures

On the surface, "A Star Is Born” is the age-old tale of joy, tragedy and loss. On deeper inspection, it is a story about the power of voice and the choices we make with our voice.

For Lady GaGa fans, this is a must see. GaGa delivers her performance from a book of unpublished sorrows; an unedited, bland-faced heroine that emerges from her ostentatious wardrobe of chandelier hats, extravagant makeup and meat dresses. The power of this performance is GaGa’s willingness to be vulnerable and tap into her tattered esteem. Her character is confident in the destructive message that stardom will elude her because of a large nose. Bradley Cooper’s off-screen friendship with GaGa perfectly melds their on-screen chemistry and dueling vulnerabilities.

The movie cuts to the chase and opens with a thumping performance by Jackson Maine (Cooper) followed by a goosebump-rousing rendition of “La Vie en Rose” by Ally (GaGa). Ally unwittingly gathers the attention of Jackson, a country-rock singer who is tormented by unspoken demons and gives the power of his voice to Jack Daniels and Jim Beam. Parented and managed by his older brother, Bobby (Sam Elliott), Jackson stole the characteristics of Bobby’s voice after giving up his own voice following their father’s death. On the surface, Jackson is smitten by Ally and dependent on Bobby. On deeper wading, Jackson is selfishly covetous of their voices. A marvel that he can confiscate and use for his own self-pacification when Jim Beam isn’t enough.

On the surface, Ally’s June Carter Cash devotion to her man is whimsical and cherished. Those who have survived alcoholism and those who have endured the abuse of alcoholics, will see the remnants of their frayed experience in Jackson’s good intentions and Ally’s dedication. Deeper wading reveals the flaw in the film’s portrayal of addiction: It’s well-meaning in Jackson’s Prince Charming salvation; it’s handsome in Cooper’s sun-burned cheeks, hypnotic blue eyes, scruffy beard and toned body; it makes mistakes of those who have given their voice to excessive consumption and it’s anonymous. The film never hones in on the source of Jackson’s torment to any discernable degree but trusts that viewers will cast their imagination in Cooper’s infectious torment.

Cooper is a loving guy. So much so that the film is cast with people he loves off-screen including his audiologist, a high school friend, Dave Chappelle and even his dog. The energizing, tender chemistry among the cast overshadows Cooper’s tractable portrayal of alcoholism which abstains from the brutality, exploitation and victimization that are hallmarks of the addiction. Ally repeatedly tells Jackson--the man who chauvinistically kidnapped her voice--that his selfish consumption is “not his fault” and further enables his self-annihilation from this “disease.” Sam Elliott is remarkable as an enabler who ends his slavery to Jackson’s addiction and regains his voice. He assures Ally that Jackson’s destruction was his own doing because he relinquished his voice. Cooper actually stole Elliott’s voice and mimics the swarthy, gruff bass during most of the film.

Famed drag queens, Shangela and William, and African-American comedians Luenell, Dave Chappelle and Eddie Griffin share their voices freely in the film and were welcomed to ad lib. Chappelle’s discussion with Jackson parallels the real-life preservation of his voice as an entertainer: “I like where I’m at,” Chappelle proclaims. Shock-comedian, Andrew Dice Clay, gives a softhearted performance as Ally’s doting father.

The soundtrack – largely written and arranged by Cooper, GaGa and Lukas Nelson, son of perpetual cannabis cowboy, Willie Nelson – speaks superbly to each phase of the union between Jackson and Ally. There is no modesty as GaGa’s melodies erupt along your spine. A minor disappointment is that production was determined to wrangle the trope of shy-girl-turned-starlet into one jolting montage after another camouflaged in duets and tambourine ringing. The editing is choppy throughout the film and lacks time references and coherent transitions.

The film eschews on-screen media-smother. There are no scenes with the press or news which will allow fans to watch with freed imaginations and hear their own voices without the hum of opinion. GaGa is known to be a courageous, kind-spirited person who advocates for contemporary causes. This weekend, GaGa used her voice to defend the silent voices of sexual assault survivors. We should all be so bold.

Trivia about Cooper’s homage to the other three renditions of “A Star Is Born”: https://www.vanityfair.com/hollywood/2018/10/a-star-is-born-original-lady-gaga-bradley-cooper-easter-eggs

GaGa Fans: 5 out of 5 Monsters

Romance-Drama Fans: 4 out of 5 Roses

People who pick movies apart and want every question answered: 2 out of 5 Mics