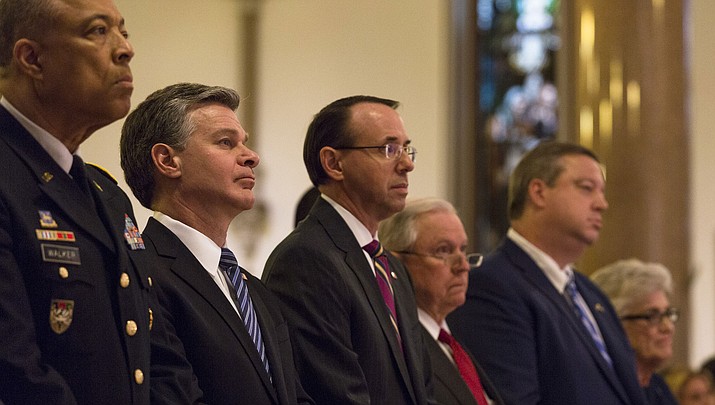 Deputy Attorney General Rod Rosenstein, middle, during the Blue Mass, held May 7, 2018 at St. Patrick’s Catholic Church in Washington, D.C. Trump has said he has no plans for firing Rosenstein. (FBI photo)

WASHINGTON — President Donald Trump declared a reprieve Monday for Rod Rosenstein, saying he has no plans to fire his deputy attorney general whose future has been the source of intense speculation for two weeks.

"I'm not making any changes," Trump told reporters as he returned to the White House after traveling with Rosenstein to an international police chiefs' conference in Florida. "We just had a very nice talk. We actually get along."

The flight provided an opportunity for their most extensive conversation since news reports last month that Rosenstein had discussed the possibilities in early 2017 of secretly recording Trump to expose chaos in the White House and invoking constitutional provisions to have him removed from office.

Those reports triggered an avalanche of speculation about the future of Rosenstein — and also the special counsel's investigation into possible coordination between Russia and the Trump campaign. The deputy attorney general appointed former FBI Director Robert Mueller to his special counsel post and closely oversees his work.

Trump said earlier in the day that he had "a very good relationship" with Rosenstein and was eager to speak with him aboard Air Force One on the flight to Florida. They did talk, for about 45 minutes, but not alone, a White House spokesman said. The subjects: violent crime in Chicago, support for local law enforcement, border security, the conference they were flying to and "general DOJ business," spokesman Hogan Gidley said without elaboration.

"I didn't know Rod before, but I've gotten to know him," Trump said at the White House earlier.

The Justice Department has denied that Rosenstein had proposed invoking the 25th Amendment of the Constitution, which would involve the Cabinet and vice president agreeing to remove him. And the remark about secretly recording the president was meant sarcastically, the department said.

Even so, Rosenstein told White House officials that he was willing to resign and arrived at the White House a week and a half ago with the expectation that he would be fired. He met in person with White House chief of staff John Kelly and spoke by phone with Trump during a tumultuous day that ended with him still in his job.

Rosenstein and Trump had been expected to meet at the White House days later, but that meeting was put off so that the president could focus on the confirmation hearing of Supreme Court nominee Brett Kavanaugh.

Trump had previously said that he would prefer not to fire the Justice Department's No. 2 official and that Rosenstein had told him he did not say the remarks attributed to him. Advisers had also cautioned Trump against doing anything dramatic in the weeks before the midterm elections next month.

Kelly was present for Monday's conversation between Rosenstein and Trump, the White House said, as was Rosenstein's top deputy at the Justice Department, Ed O'Callaghan.

The speculation over Rosenstein's future concerned Democrats, who feared that a dismissal could lead to Trump curtailing Mueller's probe. Although Trump has at times criticized his deputy attorney general, he has reserved his sharpest verbal attacks for Attorney General Jeff Sessions, who recused himself from the Russia investigation in March 2017 because of his own earlier involvement with the Trump campaign.

Both men will likely see their futures re-evaluated after the elections, Trump advisers have said.

Besides the meeting with Trump, Rosenstein has also agreed to a private meeting with House Republicans who want to question him about his reported statements on the president.