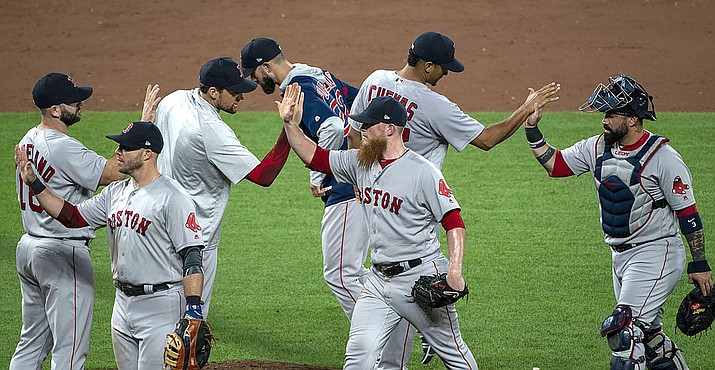 The Boston Red Sox have clinched a spot in the AL Championship Series for the first time since 2013. (Photo by Keith Allison, CC by 2.0., https://bit.ly/2pSjM45)

NEW YORK (AP) — Craig Kimbrel and the Boston Red Sox held off the Yankees' ninth-inning rally that ended with a video replay, eliminating New York with a 4-3 victory Tuesday night that set up a postseason rematch with the World Series champion Houston Astros.

Trailing in Game 4 of the AL Division Series, the Yankees scored twice in the ninth and had runners at first and second with two outs. Gleyber Torres hit a slow roller that third baseman Eduardo Nunez charged and threw in a hurry.

Boston first baseman Steve Pearce stretched for an outstanding catch that nipped Torres. The Yankees immediately challenged and, with a sellout crowd standing and hoping, the out call was upheld after a 63-second review.

J.D. Martinez and the 108-win Red Sox reached the AL Championship Series for the first time since 2013. A year after losing to Houston in a four-game ALDS, they will open the best-of-seven matchup against the 103-win Astros on Saturday night at Fenway Park. Rookie Boston manager Alex Cora was Houston's bench coach last October.

A New Jersey native who grew up a Mets fan, Porcello held the Yankees to one run over five innings for his first postseason win. Matt Barnes and Ryan Brasier followed with a perfect inning each to protect a 4-1 lead, and Red Sox ace Chris Sale followed with a 1-2-3 eighth in a rare relief appearance.

New York had not put a leadoff runner on until Kimbrel, a seven-time All-Star closer, walked Aaron Judge on four pitches leading off the ninth.

Didi Gregorius singled and Giancarlo Stanton struck out, dropping to 4 for 18 (.222) with no RBIs in the series. Luke Voit walked on four pitches, and Kimbrel hit Neil Walker on a leg with his next pitch, forcing in a run.

Gary Sanchez fell behind 0-2 in the count, worked it full and sent a drive that had the crowd roaring only for Andrew Benintendi to catch it on the left-field warning track, a few feet short of a game-ending grand slam. Torres followed with the dramatic bouncer that led to one of 21st century baseball's strangest sights — a team unsure whether to celebrate, its direction depending on a decision from the replay room in downtown Manhattan.

A night after Boston romped to a record-setting 16-1 rout in a game that included three replay reversals, Martinez, Ian Kinsler and Nunez drove in runs in the third inning off a wobbly CC Sabathia. For the second straight night, Yankees rookie manager Aaron Boone hesitated to remove his starting pitcher early.

When Boone brought in Zach Britton to start the fourth, Christian Vazquez led off with an opposite-field drive over the short porch in right field for his first career postseason homer.

Not even the presence of Bucky Dent for the ceremonial first pitch could inspire the 100-win Yankees, who were outscored 27-14 in the series, including 20-4 in the final two games. New York set a major league record this year for most home runs in a season, but didn't go deep in the two games at Yankee Stadium.

Dent's home run over Fenway Park's Green Monster in the 1978 AL East tiebreaker propelled the Yankees to their second straight World Series title, but Boston eliminated its rival in the Bronx in the teams' second straight postseason meeting. In the 2004 ALCS, the Red Sox became the first big league team to overcome 3-0 postseason deficit, winning the final two games on the road and going on to sweep the World Series for its first title since 1918.

Boston added championships in 2007 and 2013, becoming one of baseball's elite clubs, but the Red Sox had been knocked out in the Division Series the previous two years and had not reached the sport's final four since their last title.

A lanky, bearded 29-year-old right-hander, Porcello lived a traffic jam from Yankee Stadium in Chester, New Jersey, and is a 2007 graduate of Seton Hall Prep in West Orange — the baseball field there was renamed in his honor last year after he helped fund artificial turf and pro-style dugouts. The 2016 AL Cy Young Award winner entered with a 0-3 in 12 previous postseason appearances, which included four starts.

New York got its first run on Brett Gardner's sacrifice fly in the fifth. Aaron Hicks missed a home run by about 4 feet on a foul drive down the right-field line, worked the count full, then popped out to Kinsler to backpedaled from second to short right field.

Sabathia, a 38-year-old lefty who led the Yankees to their last World Series title in 2009, had been the slide-ender of New York's pitching staff with a 14-1 record following losses in the previous two regular seasons.

Pitching on 11 days' rest and perhaps for the final time in pinstripes, Sabathia escaped a bases-loaded jam in the first when Kinsler hit an inning-ending flyout to Gardner in front of the left-field wall.

He needed 35 pitches to get through two innings and nicked Benintendi on the right shoulder with a slider on his first pitch of the third. Steve Pearce sliced a cutter into right-center to put runners at the corners and Martinez hit a third-inning sacrifice fly for second straight night, giving him six RBIs in the series.

Xander Bogaerts advanced Pearce with a comebacker and, with David Robertson starting to warm up, Sabathia threw a wild pitch on a cross-up with Sanchez.

Kinsler doubled over a leaping Gardner for a 2-0 lead and Nunez singled on the next pitch for his first RBI of the postseason.