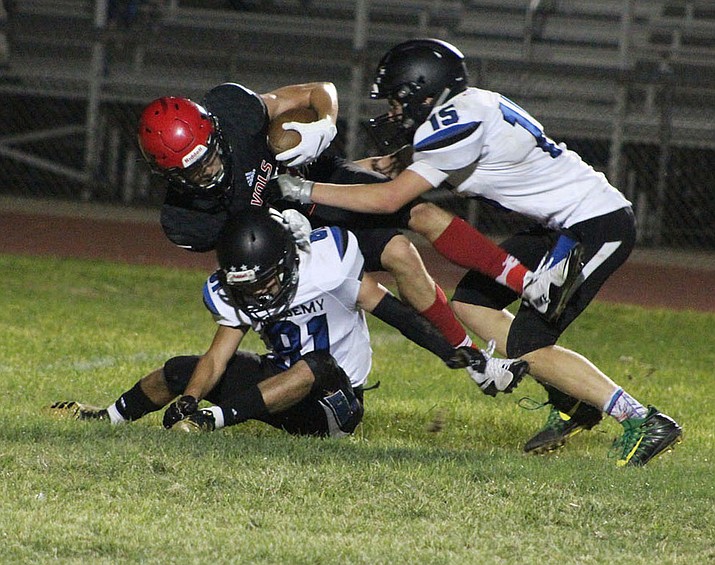 KINGMAN – The Kingman Academy High School football team’s offense hasn’t quite found its groove during the last three weeks, but there is a silver lining.

The Tigers still have found the end zone – thanks to their defense.

“We’ve scored four times in three weeks on defense and less than that on offense,” said Academy head coach John Morgando. “So it’d be nice to get something going on offense. And I think we can this week. We keep adding wrinkles here and there. We’re narrowing down what we do well and getting rid of what we do poorly.”

The No. 26 ranked Tigers will look to tally their second win in the 3A West Region tonight when the 27th-ranked Dust Devils (2-5, 1-1) make the trek to Southside Park.

Academy (2-5, 1-1) will no doubt lean on its defense and one of the leaders is someone who’s excelled in a new position at linebacker.

Connor Alleman wasn’t expected to be a huge role player with seniors Tyler Wheeler and Trevor Lowry returning for their senior year, but the junior ranks second on the team with 78 tackles (55 solo), along with two fumble recoveries and one blocked punt.

“This year has been really cool because I’ve been put in these situations and they’ve been expecting a lot,” Alleman said. “It’s good for next year when I’m a senior.”

Alleman was also quick to thank Wheeler for leading him along and helping him know where to go.

But the trio haven’t been the only difference-makers.

“I love our defense,” Alleman said. “We have (Isaac) Carter – he’s great. He has two defensive touchdowns. We’ve been trying to get that ball.”

Carter has a fumble recovery for a score along with a pick-six.

The fact that the Tigers are getting help from a number of athletes couldn’t have come at a better time as the numbers aren’t where they’ve been at in the past.

“I definitely feel like I have to put more effort in now,” Alleman said. “I can’t sub out, I have to keep going and try not to get hurt or anything like that. Just have to stay in the game because we’re not a deep team.”

But with numbers aside, Morgando knows Academy still has what it takes to compete against River Valley.

“I think we can play with them if we can execute,” Morgando said. “That’s the big thing – executing correctly like we need to and getting a little better play out of the line this week.”

The Tigers will also have to make sure to be focused, especially as this week is Homecoming.

While that may be the case, Alleman has his mind on what matters the most.

“Homecoming is great and all, but I feel like we just have to focus on our game plan and get the win” Alleman said.