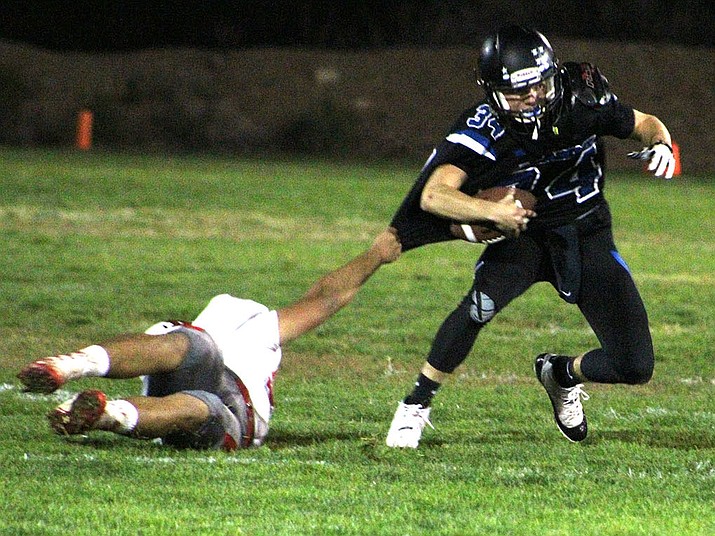 KINGMAN – Homecoming is supposed to be a time of good cheer and celebration, but that wasn’t the case Friday night for the Kingman Academy High School football team. The Tigers couldn’t find their roar, and it proved costly in a 21-0 setback to River Valley at Southside Park.

But with that fact aside, Academy head coach John Morgando and his staff shifted the team’s focus to the bigger picture with a few postgame words of encouragement. 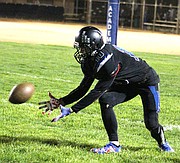 “Like I said to the kids, ‘Life is hard. Overcoming adversity is the name of the game and you have to be able to do that,’” Morgando said. “Whether it’s being short on numbers, missing some people, being undersized, or playing in 3A instead of 2A where we were last year – it’s all tough, but there’s no getting around it. You still have face it. You still have to overcome it. But the thing is, you can’t do it by yourself. It’s a team thing and we have to be together on that.”

It wasn’t for a lack of trying though.

Academy sophomore Charlie Anderson continued to show great signs in only his third start at quarterback. While he did throw two interceptions, he finished with 150 yards and found five different receivers.

It just wasn’t enough as the Tigers couldn’t find a way to capitalize when they needed to the most.

“We had some good drives going and that’s part of the frustrating thing,” Morgando said. “(Anderson) had a decent game throwing the ball. He hit a lot of different guys and we got some people going that we wanted to get going.”

Anderson was also the team’s leading rusher with 40 yards, including a few long scampers on broken plays.

But try as Academy might, the defense had a few letdowns and River Valley scored touchdowns in those instances.

The Dust Devils only led 7-0 at halftime and that gave the Tigers hope during a break from the action.

“We tried to make some adjustments – once again try to create ways to get our playmakers the ball even though they were in different spots,” Morgando said of his halftime game plan. “We tried to do stuff like that and figure out what we could do well.”

Unfortunately, it wasn’t enough as the Dust Devils tallied a score in the third quarter and one more in the fourth for the win.

Academy’s Nate Perea finished the game with five catches for 96 yards, followed by Dallas Edwards with three catches for 29 yards and Tyler Wheeler with a 19-yard catch.

The journey doesn’t get any easier for the Tigers as they hit the road for a 7 p.m. contest Friday at No. 1 ranked Northwest Christian. The Crusaders (7-1, 3-0) will be coming off a 72-6 rout of Kingman High.