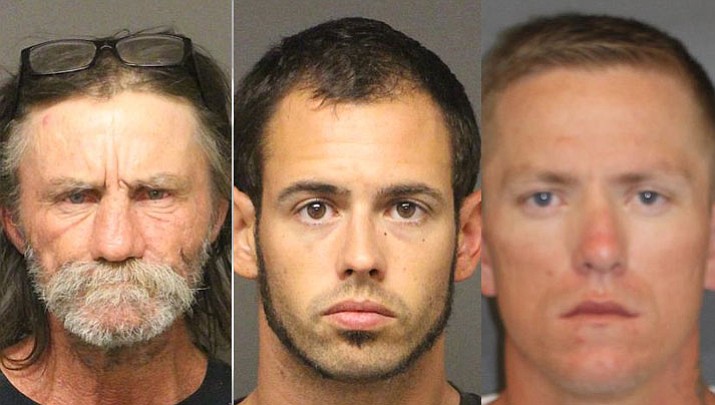 Kathrine Louise Toth, 58-year-old Kingman resident, was arrested at about 2:55 p.m. Oct. 5 near the 1800 block of Airfield Avenue in relation to dangerous drug possession.

Kingman Police Department officers responded to the Mohave County Parole Office in reference to drug paraphernalia found in a vehicle in which a parolee was a passenger. Law enforcement reports the driver of the vehicle, identified as Toth, was found in possession of methamphetamine and drug paraphernalia.

Kathrine Louise Toth was arrested for possession of dangerous drugs and possession of drug paraphernalia, both felonies, and booked into the Mohave County jail.

The Kingman Police Department reports that Jonathan Kirsh-Randa Robinson, 33 of Sacramento, California, was arrested at about 2:45 p.m. Oct. 6 after law enforcement discovered he was driving a stolen vehicle.

KPD responded to a call of a disorderly female at a business in the 200 block of E. Beale Street on Saturday. Robinson, who was traveling with the female, reportedly came out of the store and yelled at officers when they made contact with her. At this time, law enforcement reports finding that Robinson was driving a stolen vehicle out of Sacramento.

Robinson was taken into custody, and police found that he had a felony failure to appear warrant issued out of Maricopa County Superior Court. He was booked into the Mohave County jail after being arrested for felony charges of unlawful means of transportation and a fugitive from justice warrant.

The 26-year-old California female, unable to answer questions asked by officers, was taken to Kingman Regional Medical Center for a medical evaluation.

Authorities report a Kingman man tried to flee from law enforcement officials through a window and then barricaded himself in a residence following a report of physical domestic violence.

Jesse Michael Yamaguchi, 33, was arrested by the Kingman Police Department at about 1:45 a.m. Oct. 6.

KPD responded to the 600 block of E. Beale Street, and upon arriving made contact outside the residence with two female victims who identified Yamaguchi as the suspect.

When Yamaguchi had barricaded himself, an attempt to gain compliance through the use of negotiation and pepper spray failed. The suspect broke through the ceiling of the residence and gained entry into the attic. He then went through the attic vent and ran across the rooftops of several residences.

Failing to comply with law enforcement instruction, Yamaguchi was struck with pepper balls deployed by KPD officers. The suspect then jumped off the roof and ran on foot, but was taken into custody at a residence in the 600 block of Court Street.

Yamaguchi had minor injuries received during the incident and was treated by medical personnel before being booked into the Mohave County jail. He was arrested for domestic violence by criminal damage, resisting arrest, and possession of drug paraphernalia, all felonies, and misdemeanor domestic violence by disorderly conduct.

Kingman Police arrested Dennis Paul Carey, 47 of Kingman at approximately 4:05 p.m. Tuesday in the 500 block of First Avenue on felony charges of possession of a dangerous drug and possession of drug paraphernalia and a misdemeanor warrant.

This arrest stemmed after police contacted Carey while investigating a criminal damage incident that occurred in the 400 block of Damon Avenue.

Carey was found to have a misdemeanor warrant and was taken into custody. Carey was found in possession of methamphetamine and drug paraphernalia. He was booked into the Mohave County Adult Detention Facility without incident. 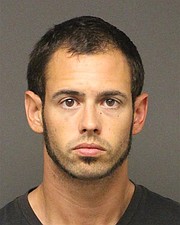 On Sept. 29, deputies made contact with a reporting party who advised he was the property owner of a residence in the 2400 block of Arizona Avenue and had noticed unusual activity on the property’s electric bill.

Deputies responded to the residence and observed it was occupied by a male subject, later identified as Phillips-Ellison and a young female child.

After interviewing Phillips-Ellison, deputies figured out that he had moved into the residence in August with his girlfriend.

Over the next week, deputies attempted to make contact with the subjects at the residence several times with negative results.

On Oct. 5 deputies made contact at the residence with Phillips-Ellison and the female subject.

Both parties allegedly told deputies that all contact with the “landlord” had been made by phone and email but they couldn’t provide deputies with the emails to support their statements.

Phillips-Ellison allegedly told deputies he knew that he was not dealing with the home owner and he was arrested for the above charges.

Deputies advised the female she needed to vacate the property and have submitted charges against her as well. This case is ongoing. 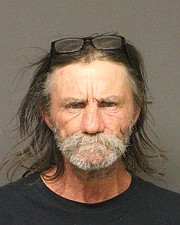 On Oct. 7 deputies observed a red vehicle traveling east on John L Avenue. A records check revealed the registration was expired and conducted a traffic stop.

Before deputies could approach the vehicle, both the female driver and male passenger exited the vehicle.

The female driver admitted to having a suspended license and was detained. The male passenger, identified as Balderston, was searched and deputies located a marijuana pipe and a metal tin containing a white crystal substance in his pockets.

A baggie containing approximately 3 grams of methamphetamine was located outside the vehicle where Balderston had exited.

The female was cited and released from the scene for driving on a suspended license. Tony Byron Balderston was arrested and booked into Mohave County Jail without incident. 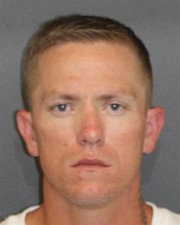 Police arrested Derek Deverne Ferrier, 30, of Kingman, at about 2:45 p.m. Thursday on felony charges following a chase through neighborhoods around Harrison and Los Angeles streets.

Officers tried to stop a quad for a traffic violation around Wilshire Avenue and Harvard Street, and the rider accelerated at a high rate of speed into a desert area to get away from the officer.

Police offers saw the quad in the 2200 block of Robinson and Lucille avenues, and spotted a man matching the suspect’s description who immediately fled on foot.

After chasing the suspect through several backyards, officers captured him in the 2200 block of Florence Avenue. He was uncooperative and refused to give any information about his female passenger.

The quad was founded in the 1800 block of Harrison Street and was reported stolen through the Mohave County Sheriff’s Office.

Ferrier was booked into the Mohave County jail on felony charges of unlawful flight from law enforcement and unlawful means of transportation.