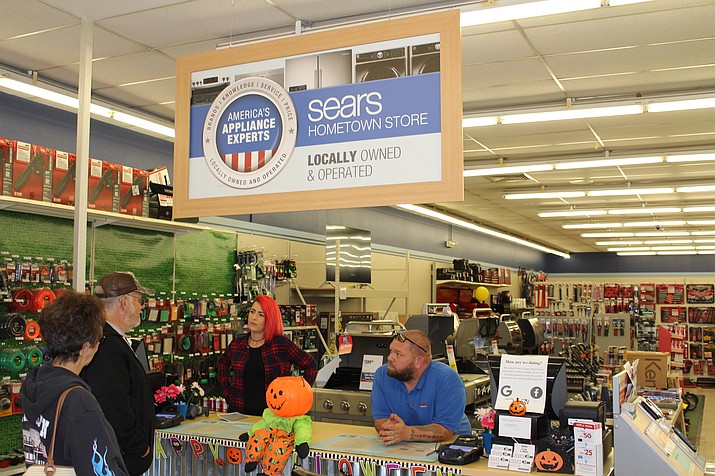 Mandy Suprian, center, helps a customer Monday at the Sears Hometown store in Kingman. Sears Hometown is a separate corporation from Sears Holding, which filed for bankruptcy Monday and announced plans to close 142 stores. (Photo by Hubble Ray Smith/Daily Miner)

KINGMAN – The Sears Hometown Store at 3155 Stockton Hill Road will not be affected by the bankruptcy filing of Sears Holding Co. and the announced closing of more than 200 stores, a store employee said Monday.

“It shouldn’t affect us at all,” said Mandy Suprian, sales associate at Sears Hometown Store. “We’re technically a separate corporation, so we’re not going anywhere.”

The Kingman store has five employees, Suprian said. They recently moved across Stockton Hill Road to the 7,500-square-foot former Family Dollar store in the Safeway-anchored Kingman Square Shopping Center for a better deal on rent, she added.

Sears Holding announced Monday it is filing for Chapter 11 bankruptcy, not an unexpected move as the troubled retailer attempts to restructure its business and stave off slipping into oblivion.

The company said it will be closing 142 stores by the end of the year.

There are more than 700 Sears and Kmart stores still open, down from about 2,000 stores five years ago.

Liquidation sales are taking place at dozens of stores around the country, and will start shortly at the 142 stores slated for closure. However, shoppers shouldn’t expect deep discounting right away. Retailers tend to offer smaller markdowns at the start of liquidation, ramping up as the actual date of the store closure approaches.

Sears’ bankruptcy filing seemed inevitable to many retail analysts as brick-and-mortar store sales have plummeted in recent years, caving in to online shopping.

Sears sold off its signature Craftsman tool brand in an effort to pay down its massive debt, and was propped up by years of debt financing by Chief Executive Officer Eddie Lampert.

“Our goal is to achieve a comprehensive restructuring as efficiently as possible, working closely with our creditors and other debtholders, and be better positioned to execute on our strategy and key priorities,” Lampert said in a company statement.

Sears staves off liquidation, stores to remain open
Kmart closes its doors for good
Kingman's Kmart slated to close
Girdles and socket wrenches: Sears was the Amazon of its day