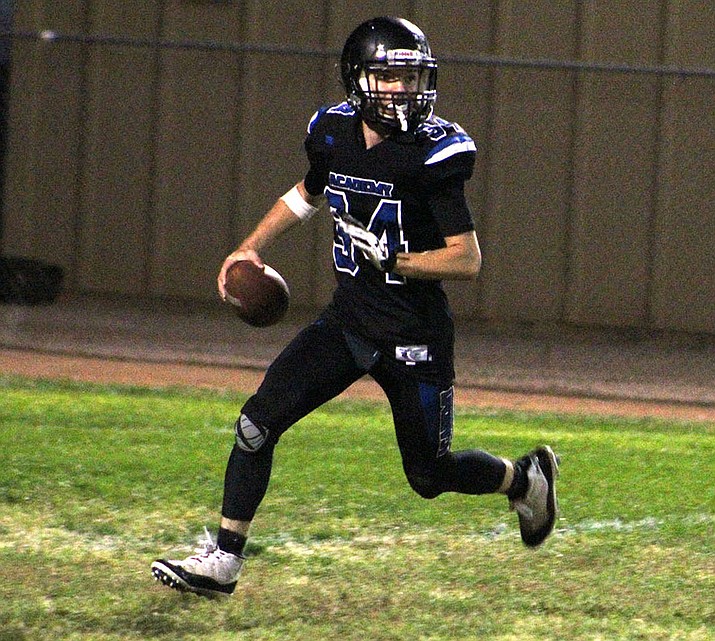 Quarterback Charlie Anderson and the Tigers make the trek to Phoenix to face the top-ranked Crusaders at 7 p.m. Friday. (Daily Miner file photo)

KINGMAN – All it takes is a quick glance at last week’s final score and the Kingman Academy High School football team knows what it is up against on the road Friday night.

The Tigers face No. 1 Northwest Christian fresh off a 72-6 blowout of Kingman High and that has shifted the focus in a more manageable direction.

“We’re looking at the small things this week,” said Academy head coach John Morgando. “We’ve been telling them that we just want to see improvement in our technique and stuff. We’ve got sloppy on technique – some of it is fatigue and some of it is just not taking to what we’re supposed to do. The big push this week is we want to see the technique executed.”

The 28th-ranked Tigers (2-6, 1-2 3A West Region) easily could have tallied their second region win last week, but small miscues cost them in a 21-0 loss to River Valley.

It won’t get any easier against the Crusaders (7-1, 3-0), but there are ways to make it a worthwhile contest.

“You’re not going to play anybody better this year than Northwest Christian, so what we want to see is if you’re working the technique right,” Morgando said. “You’re doing everything you can do to play that right and execute. Hopefully that’s what we see – solid improvement whatever the score ends up being.”

Academy will be outmanned in both size and numbers, so the best bet will be to look for success through the air with quick strikes.

Sophomore Charlie Anderson will make his fourth start at quarterback and showed great signs last week against the Dust Devils.

“He did actually play a pretty good game against River Valley,” Morgando said of Anderson. “I think he had his most yardage to date and I think his best completion percentage as well, which is good. Obviously you want to see touchdowns, too, but he’s really progressing pretty well and that’s something nice to see.”