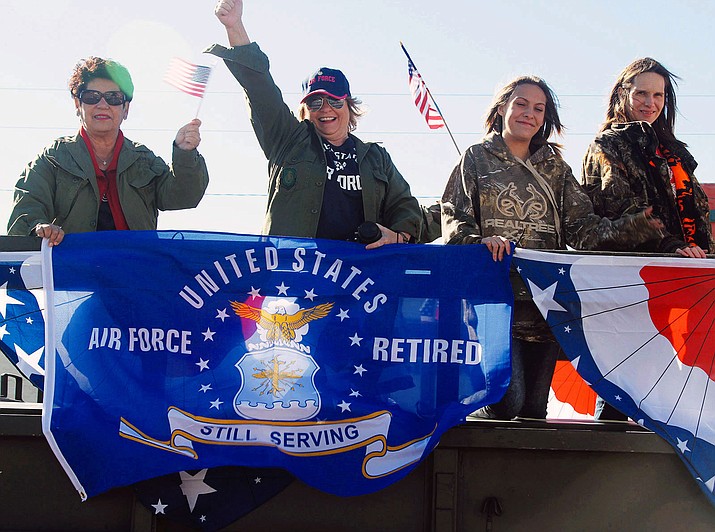 A scene from the 2016 Veterans Day Parade in Kingman. (Daily Miner file photo)

KINGMAN - Americans from across our great nation will pay homage next month in observance of Veterans Day.

Veterans Day is a national holiday held every Nov. 11 honoring and thanking men and women, both living and deceased, who have served in the U.S. military, for their patriotism, heroism and willingness to serve their country in the face of danger.

There is some confusion by Americans when it comes to honoring veterans. Veterans Day celebrates the service of all U.S. military veterans, while Memorial Day only honors those who died while in military service. It also should not be confused with Armed Forces Day, a minor U.S. remembrance that occurs in May, which specifically honors those currently serving in the U.S. military.

Since Veterans Day actually falls on a Sunday this year, the Kingman Veterans Day Parade committee has decided to host the parade in downtown Kingman on Beale Street at 10 a.m. Saturday, Nov. 10. Kingman Veterans Day parade participants will travel on Beale Street from Fifth Street to Locomotive Park. This year’s theme of the parade is honoring the U.S. Marine Corps that is celebrating its 243rd birthday Saturday, Nov. 10, and according to the parade committee, they would like to honor all local Marine Corps veterans for their service.

Those interested in participating in the Kingman Veterans Day Parade, donating items for the parade raffle or volunteering to help make the parade a success, can do so by visiting its website at http://kingmanvetparade.org or calling 928-753-6626.

Just because the parade will honor the U.S. Marine Corps, parade officials hope all people who have served in the military, family members of current and former military personnel, and all concerned citizens will want to participate and attend the parade.

Government officials estimate there have been more than 666,000 Americans who have died as a result of combat since 1775 and another 1,498,240 were wounded in action. There are 40,917 U.S. servicemembers listed as missing in action, however, many of them are presumed dead.

Remember the true reason to participate in Veterans Day ceremonies is to reflect upon those who are serving this great nation and those who have made the ultimate sacrifice.

Take the time to research Veterans Day, and if someone says they don't know why it is a National holiday, take the time to explain exactly why it is so important to our country and the American people.

Veterans Day is important for our country
Remembering those who sacrificed everything is the meaning of Memorial Day
Veterans Day Parade takes work to honor America’s military forces
At least 600,000 US military personnel have sacrificed their lives so we can enjoy our many freedoms
Butch's Brew: Memorial Day