Prep Football: Jackson, Bulldogs prepared for another challenge in No. 8 ranked Wickenburg 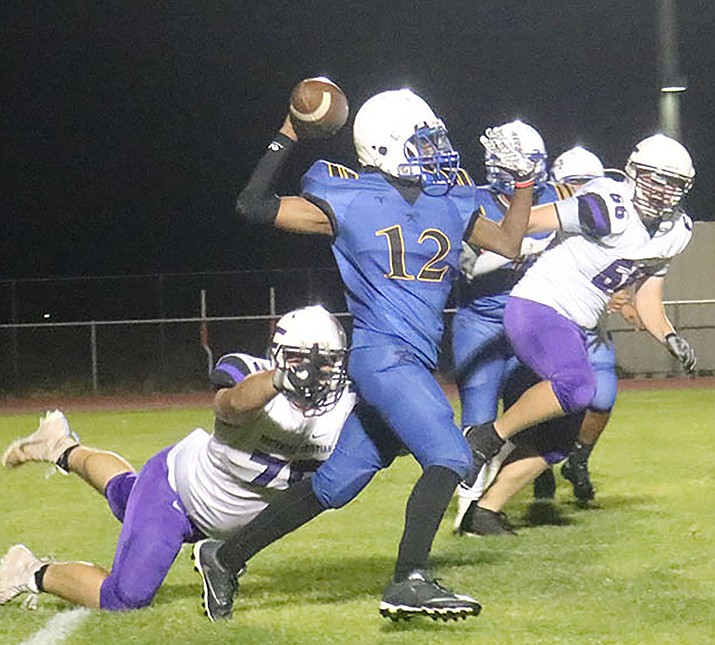 Freshman Lamar Jackson will start at quarterback for the Bulldogs Friday night against Wickenburg. Jackson has thrown a touchdown in each of his last two games. (Photo by Travis Rains/Daily Miner)

KINGMAN – Lamar Jackson may only be a freshman on the Kingman High School football team, but head coach Cam Wierson already has high praise of the “smooth operator.”

“He has a calmness to him that gives way to playing with a level head, which is a key characteristic of excellent quarterback play,” Wierson said of Jackson. “He was definitely thrown in the fire last week. We installed the offense on Monday and he played a game that Friday. It takes two to three years in a system for me to consider a quarterback well prepared.”

Jackson is far from that point – he only has two weeks under his belt and there is still plenty of room for improvement. That was evident after Jackson threw six interceptions last week in a 72-6 setback to Northwest Christian.

However, lost in the final score was Jackson finding freshman Dom Concepcion for a touchdown.

It was Jackson’s second straight game with a passing score and there is strong likelihood he could be the future face of the Bulldogs program.

“He has a chance to be an all-state quarterback if he puts in three good offseasons and learns the art of commanding men,” Wierson said. “

While the record shows success, Wierson believes Wickenburg is “not an elite football team.”

“They’re a bubble playoff team – they’re not a daunting opponent,” Wierson said. “They’ve just got a program established. It’s a one-school town, and their kids love to play football the way it’s supposed to be played – violently and with all-out effort.”

Senior quarterback Mike Mindnich leads the way with 1,130 yards passing and 14 touchdowns along with 630 yards rushing and eight scores.