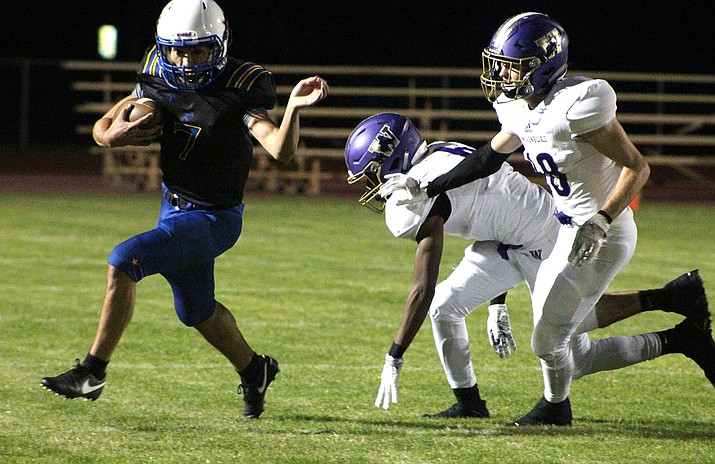 KINGMAN – It’s never easy to lose, but it’s even more difficult to experience a blowout loss on your home field. The Kingman High School football team dealt with that Friday night in an 84-14 setback to No. 8 ranked Wickenburg.

But while the final score wasn’t pretty, the Bulldogs kept their heads held high and showed the heart of a champion.

“I’ve been challenging them for a few weeks now to take all comers no matter what the scoreboard says – you just play with your hearts out,” said Kingman head coach Cam Wierson. “And we finally did it against an overwhelming opponent, which is hard. I’ve been saying it for three years, anyone can work hard and have a good attitude when everything is going well. But are you working hard and having a good attitude when it’s hit the fan?”

The Bulldogs even showed gratitude to Wierson following his postgame speech. A few players walked up to their head coach and gave him a hug and said a few words.

“I just had some kids come up to me just now and said ‘We played for you tonight, coach,’” Wierson said. “That means a lot. It hurts when they don’t – it hurts my heart a lot when I question whether or not they’re playing for each other, for our staff and as a group.”

The team mentality proved beneficial for Kingman as it found ways to move the ball against the Wranglers (7-2, 3-1 3A West Region).

Freshman quarterback Lamar Jackson threw for 164 and two touchdowns, including a 79-yard strike to senior Danny Dias in the first quarter to bring the Bulldogs within two scores 22-8.

Unfortunately, Kingman never inched any closer as Wickenburg capitalized on defense with six interceptions, including five returned for a touchdown.

But worth mentioning is the fact Jackson is still adjusting to the varsity level. Most athletes his age would be playing junior varsity.

“He’s talented, but he’s a ninth grader so he’s making some decisions that make you say, ‘Really?’” Wierson said. “It takes two to three years to get a quarterback ready. And he’s on week three.”

Jackson still showed poise in the pocket throughout the game and later found Darrell Mitchell on a 20-yard touchdown late in the third quarter.

The game is set for 7 p.m. at Southside Park.