One dead in rollover crash, another injured 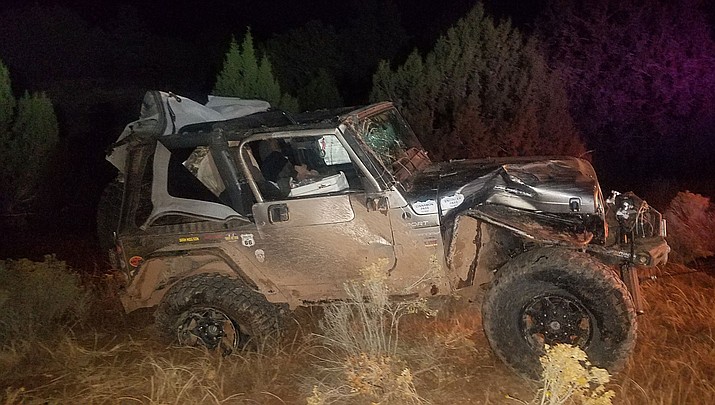 Deputies responded to a rollover crash Tuesday at 3 p.m. where one of the victims was pronounced dead at the scene and another flown to the local hospital for injuries. (courtesy)

MOUNT TRUMBULL – A single vehicle rollover accident left one deceased and another injured.

Mohave County Sheriff’s Office deputies responded to a rollover accident approximately at 3 p.m. Tuesday in the area of Mount Trumbull. Deputies didn’t have much information to gone while responding to the call that a jeep was involved with two occupants and the reporting party was preforming CPR on the male subject.

Life Flight was dispatched to the scene and upon arrival it was determined that the male subject was deceased. Life Flight transported the female patients to a local hospital where she is being treated for unknown injuries.

Deputies arrived on scene and spoke with the family that had been traveling with the jeep. They stated that the two couples had been exploring the Mount Trumbull area and returning from a picnic.

They were traveling ahead of the jeep involved in the crash and at some point they noticed their friends weren’t behind them. They went back to look for them and found the jeep laying on its side with the female laying not far from the jeep alert, but the male was unresponsive.

They performed CPR for approximately 20 minutes until Life Flight arrived and determined that the male subject had passed. The couple also had their dogs with them that were uninjured and were located and taken by the couple’s friends.

It appears from initial investigations that the driver failed to negotiate the turn on the slick dirt and the jeep left the roadway on the right, hitting the soft shoulder causing it to roll. At this time impairment does not appear to be a factor.