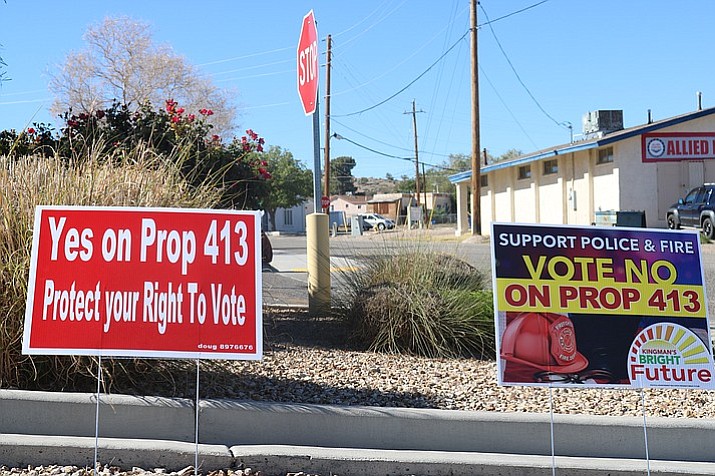 I have lived in Kingman for almost 45 years and continue to enjoy the small town feel it has and appreciate its limited growth. However, our town is growing rapidly, and we need to provide support for the increased growth in population, business, and tourism.

If you live within Kingman’s city limits, your Nov. 6 ballot contains two propositions that will strongly influence the future of our city. To avoid negative impacts on Kingman, it is critical to vote yes on Proposition 412 – Home Rule, and to vote no on Proposition 413 – the TPT Repeal Initiative. Please read the following explanations of the two ballots.

Proposition 412 – Home Rule. A state law exists that limits the amount cities can increase their expenditures from one year to the next. However, cities have an option to adopt “Home Rule” that allows them to exclude certain costs from their expenditure calculations, so cities can use more of their budgets for local needs. Kingman adopted Home Rule in the late 1980s, has renewed it each year, and it is necessary to renew the option this year. Failure to approve it will force millions of dollars that are currently excluded from the expenditure calculation, to now be included, and would force massive cuts to all department budgets, including fire, police and roads. It would also be very difficult for the city to continue most non-essential services (such as parks, recycling, and the golf course). The costs of operating the airport and industrial park would be at risk of cuts … just like all the other city departments.

Please vote yes on proposition 412. Proposition 413 – TPT (Sales Tax) Repeal. If passed, this would repeal the 1 percent TPT (Sales Tax) passed by City Council in August 2017 and would remove Council’s ability to adjust sales and use taxes without a vote of the general public, which occurs every two years or through a costly special election. It would limit Council’s ability to make decisions in the best interest of Kingman, for which we elected them.

Half of the 1 percent TPT (about $3.1 million per year) is dedicated and must only be used for street repairs and maintenance. This Pavement Preservation Program is critical to maintaining safe and smooth streets.

The other half of the 1 percent TPT is dedicated and must only be applied to necessary capital improvement projects (roads, buildings, and equipment). More than $100 million of which has been deferred for years until “things get better.” “Things got better” because of the new revenue, due to the current TPT.

Improvements this year include a new fire engine for Station 2, security for the police department building, new park equipment, and progress on Eastern Street and Rancho Santa Fe I-11 traffic interchange.

A proposal for Kingman Crossing interchange is being refined by attorneys for Kingman Regional Medical Center and should be sent to Council soon.

If Prop 413 passes, it will put both interchanges at risk and force the City into a stagnant position. We have been paying the new TPT rate this year, and it has not noticeably changed our lives. Repealing the TPT will have an impact on all of us by limiting Kingman’s development.

Please vote no on Proposition 413.

Vice mayor advocates for ‘no’ votes on ‘Draconian’ Prop 413
Propositions 412, 413 get approval from voters
Letter | The TPT initiative
Prop. 413 signage, expenditures under scrutiny
Letter | An endorsement for candidates who support growing Kingman