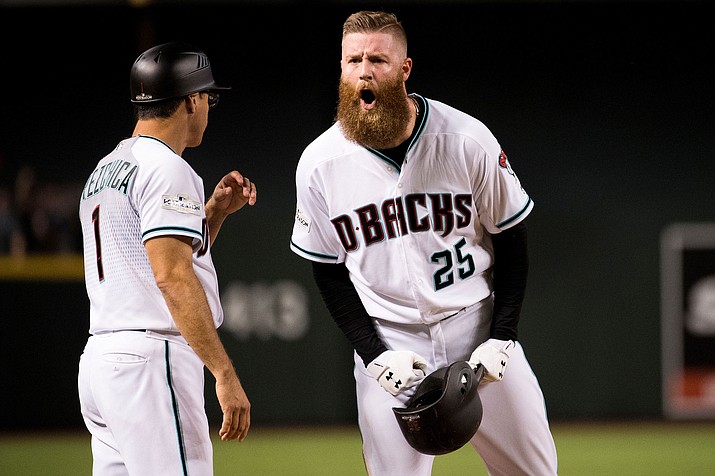 LOS ANGELES (AP) — Matt Kemp has had a lot of big hits for the Dodgers in his career. Traded back to them this season, he's regaining his rhythm offensively in the heat of a pennant race.

Kemp slugged a go-ahead, two-strike, three-run homer in the eighth inning, lifting Los Angeles to a 3-2 victory over Arizona and a tie atop the NL West with the Diamondbacks on Saturday night.

"Coming into September, we know what every game means," he said. "I don't think they're going to quit, so we got to be just as good."

With the sellout crowd of 52,394 on its feet chanting "Let's go Dodgers," Kemp took two quick strikes from Archie Bradley before launching his 19th homer into center field for a 3-2 lead.

Justin Turner got the rally going with one out in the inning. He singled for the Dodgers' first hit since his double in the third. Manny Machado followed with a 10-pitch walk by Bradley to set up Kemp.

"Biggest hit of the year so far," starter Clayton Kershaw said of Kemp's homer. "J.T. fights off a tough pitch to shoot it through the hole and Manny fights off that at-bat. It was an awesome comeback win for us."

Bradley (4-5) was leading the National League in holds with 31 before Kemp's homer.

"I threw a really bad curveball to a really good hitter," Bradley said. "It was supposed to be down and away but I left it over the plate."

Kenta Maeda (8-8) worked a perfect eighth. Kenley Jansen put the tying run on in the ninth. The All-Star closer gave up a two-out double to Nick Ahmed before Ketel Marte popped up to second, giving Jansen his 34th save in 38 opportunities.

Enrique Hernandez got the first out of the ninth on a stellar play. He made a diving stop on David Peralta's grounder and threw from his back to first baseman Cody Bellinger just in time.

"You can plug him anywhere and he's going to make big plays," Lovullo said.

Neither team has won by more than two runs in the first three homer-heavy games of the series. Turner's homer leading off the eighth gave the Dodgers a 3-2 victory on Friday. The D'Backs won the opener 3-1 on Peralta's three-run shot.

"This is a tough loss, but we didn't lose a playoff game," Bradley said. "One game does not define this team."

Arizona led 2-0 after Eduardo Escobar and pinch-hitter Christian Walker led off innings by homering on first pitches from Kershaw.

Escobar went deep to left field in the second. Walker, hitting for starter Patrick Corbin, landed one in left-center for his second career pinch-hit homer off Kershaw.

In between Arizona's two homers, Kershaw retired 12 consecutive batters. The left-hander gave up two runs and four hits in seven innings, struck out three and walked none.

Corbin allowed three hits, struck out seven and walked one. The Dodgers have struck out 31 times in Corbin's four starts against them this season and he's limited hitters to a .125 average.

Arizona's Paul Goldschmidt singled in the sixth to reach base in his club-record 44th straight road game.

D-backs: 3B Jake Lamb (left shoulder contusion) recently had surgery to repair fraying in the rotator cuff and is done for the season. He's expected to be ready by spring training.

Infielder David Freese made his debut after being traded to LA from the Pirates a night earlier. He reached base safely in two of three plate appearances, going 1-for-2 with a hit by pitch.