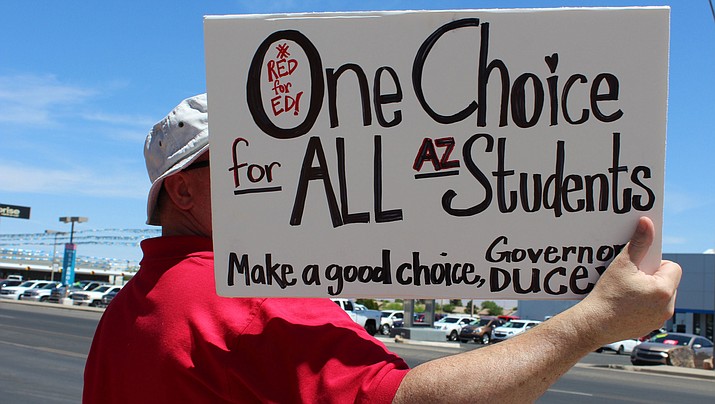 The Arizona Supreme Court ruled Aug. 29 that the Invest in Ed tax initiative would not be on the ballot in November. Teachers in Kingman were on the front lines of the #RedforEd movement and aren’t too happy with the court’s ruling. (Daily Miner file photos)

Since March, educators from Kingman Unified School District and Kingman Academy of Learning have been out in full force wearing red, standing outside of their schools with signs saying “Walking today for your children’s tomorrow.” They have been a sea of red on Stockton Hill Road, and have even gone to the Arizona Capitol to rally for educations’ better tomorrow.

During the #RedforEd movement, the Invest in Ed tax initiative, Proposition 207, was born. The tax initiative would have increased the tax rate for those who earn more than $250,000 a year.

The proposition was struck from the ballot Aug. 29 by the Arizona Supreme Court for not providing petition signers all the information. Some information left out was that the initiative would do more than just raise taxes. Chief Justice Scott Bales concluded the proposition would create “confusion or unfairness.”

Educators in Kingman have been on the front lines since Day 1 hoping to receive more funding for their classrooms.

Susan Collins, a music specialist at Manzanita Elementary School, had a combination of feelings when she heard the news about the initiative being knocked off the November ballot.

“I’m sad for the students and teachers who will continue to persevere in severely underfunded classrooms,” she said.

Other teachers like Tyler Griesbach, a music teacher at Black Mountain School, said since they can’t have additional funding on the table, they must make sure what they do have stays in public schools.

Proposition 305 is an Empowerment Scholarship Account that allows parents or guardians of students with disabilities to sign a contract to withdraw their student from the public school system. Instead, they will receive an ESA that would be spent in private education, homeschooling, or any other form of education that’s not public.

A “No” vote would repeal the expansion of the ESA program available to all public school students eligible.

J’aime Morgaine, Arizona State Senate candidate for District 5 is pro-education and was down in Tempe Saturday joining other Arizona educators that are willing to make a change for education.

“It’s a heinous thing that the Supreme Court did. It doesn’t matter about the party, we need to have legislatures that will support public education,” Morgaine said.

Although, not everyone in Kingman is upset about the tax initiative not passing. Laurence Schiff, chairman for the Mohave County Republican Central Committee emailed the Daily Miner about the “spectacular news.”

“This is fabulous news, as in my judgment the real aim of this proposition was to pump up the Democrat turnout in November, the better to elect a Democrat to the Senate and to change the makeup of our legislature,” he wrote.

Collins said she feels like she is fighting in the Continental Army. She said she will support pro-public education candidates and work to get them elected in November.

“We have lost a strategic battle in the war to save public education, but we are not defeated,” she said. “We will carry on, we will continue to fight.”

Letter | #INVESTinEd
Verbiage on ballot for Prop. 305 could cause confusion
5 statewide propositions on ballot; what are they all about?
Court throws education tax initiative off ballot
Community View | Fight for Arizona education isn’t over