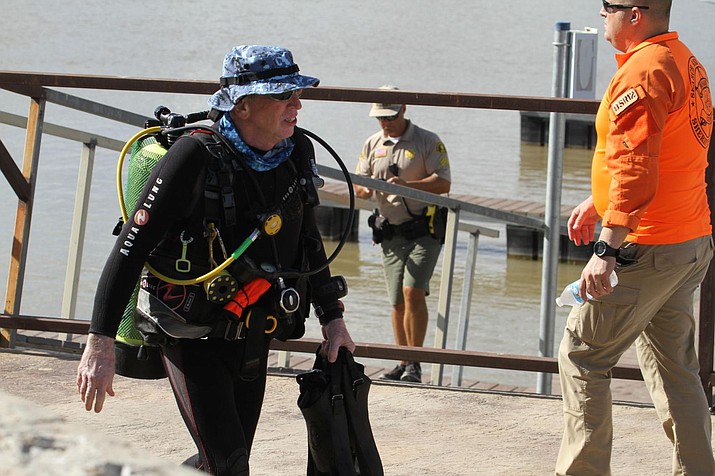 Divers from the Mohave County Sheriff’s Department return to shore at Topock 66 on Tuesday. The divers have been searching since Saturday for the victims of a fatal Saturday boating accident near the location. (Photo by Brandon Messick/Today’s News-Herald)

The Mohave County Sheriff’s Office continued Wednesday in its search for the final victim of a Saturday boating accident. The remaining victim, who has yet to be located, is presumed deceased.

Deputies are still investigating the cause of the head-on boat collision, which occurred Saturday evening near Topock Marina. One boat, occupied by six people, collided with another boat that held 10 people. All 16 passengers, none of whom were wearing flotation devices, were ejected into the water. Passing boaters were able to rescue several of the victims, and two were flown to a Las Vegas hospital in critical condition.

Now, about 70 people, fielding helicopters, patrol boats, divers, drone operators and kayaks are searching the Lower Colorado River from a mobile command center at Topock 66. Their efforts are focused on the area of Topock Gorge, and according to Mohave County Sheriff’s Public Information Officer Anita Mortensen, the search will continue until the last remaining victim is located.

Raegan Heitzig, a friend of Drury’s and niece to Grabowski, was the one passenger who remained missing as of Wednesday afternoon. Heitzig was not identified by Mohave County Sheriff’s officials until Tuesday, when Heitzig’s family identified her through social media.

The Mohave County Sheriff’s Office reopened boating traffic through the area Wednesday morning, but advised the boating public that there would be an elevated law enforcement presence on the river as the search continued. Boaters are encouraged to remain aware of search crews throughout the Lower Colorado River this week.

Heitzig’s family created a Gofundme.com account Tuesday to raise funds for possible funeral expenses, and for medical costs associated with Heitzig’s surviving sister and aunt, who were also aboard their watercraft when the collision occurred. Heitzig’s sister, Jordan, was rendered unconscious during the accident, and was rescued from the water by her aunt. Jordan Heitzig sustained a fractured spine and burn injuries from the accident, according to Heitzig’s family.

Their Gofundme campaign raised almost $51,000 as of Thursday afternoon. Donors can contribute to Heitzig’s campaign at www.gofundme.com/supporting-rae-rae-amp-jo-jo.

Drury’s family also created a Gofundme.com account Monday to aid with the cost of funeral expenses to come. The crowdsourcing effort raised almost $38,000 as of Thursday.

Donors can contribute to the campaign at www.gofundme.com/venturastargirl.