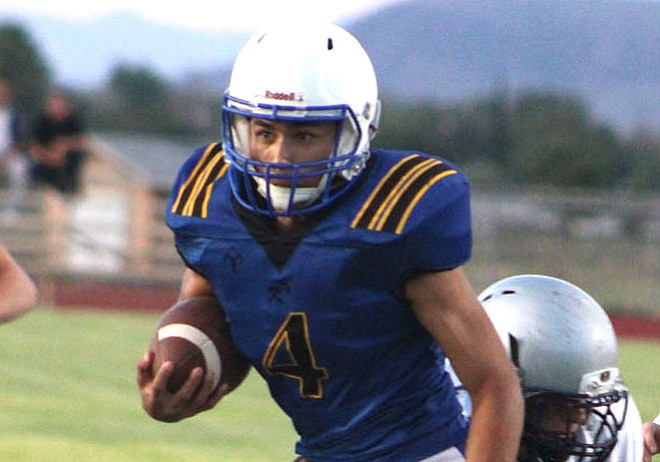 Kingman’s Austin Dias rushed for 114 yards and one touchdown Friday night in a 46-3 win over Valley Lutheran. The Bulldogs put up 404 yards of total offense. (Daily Miner file photo)

KINGMAN – The Kingman High School football team made its presence known early in the first quarter against Valley Lutheran.

While the Flames recovered a fumble and took it 70 yards to the 6-yard line, the Bulldogs held their opponent to a field goal on the way to a 46-3 blowout Friday night at Camelback High School.

“The stop was obviously a good thing for us, but the biggest takeaway from the series of events was it discouraged Valley,” said Kingman head coach Cam Wierson. “The ‘light bulb’ of Valley realizing they were up against a better weight room team clicked on at that point.”

With the victory, the Bulldogs improved to 3-0 on the season to exceed last year’s win total.

Kingman did so in dominant fashion, racking up 404 yards of total offense – highlighted by 336 on the ground.

“I’m tremendously happy for our kids, particularly the ones that have put in two to three offseasons with me,” Wierson said. “It’s really cool to see the game of football teaching young men how to out-prepare a competitor. The game of football is arming these kids with the skill set and mentality to be successful in life.”

Austin Dias led the way for the Bulldogs with 10 carries for 114 yards and a touchdown, while Gavin Randall added 92 yards and a score. Darrell Mitchell also had a rushing touchdown.

Powers Corbin even joined the offensive onslaught with seven carries for 89 yards and a touchdown. Corbin added a 68-yard strike through the air to Danny Dias for six points.

“The game is about all 11 guys on the field – any success a ball carrier has comes from the other 10 doing their job well,” Wierson said. “And yes, it’s great for morale when multiple guys touch the football.”

Defensively, Danny Dias recovered a fumble and took it 15 yards for a touchdown. The senior also recovered two onside kicks.

Dom Concepcion had a 46-yard interception return as the Bulldogs’ defense allowed 19 yards rushing and no pass completions.

“We beat Valley in the weight room,” Wierson said. “A process these seniors started in April 2016.”