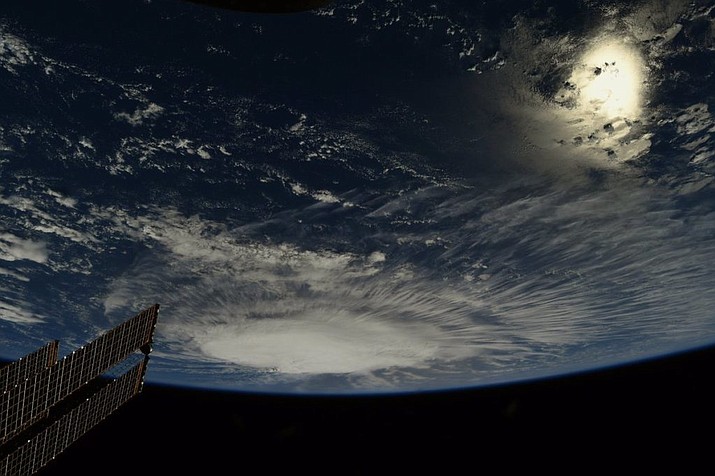 Astronaut Ricky Arnold captured this image from the ISS of Florence strengthening in the early morning hours over the Atlantic. (Photo provided by NASA)

The National Hurricane Center said Saturday the storm was expected to become a "major hurricane" by Tuesday as it passes between Bermuda and the Bahamas on Tuesday and Wednesday. The storm is expected to approach the southeast U.S. Coast on Thursday.

Officials in North Carolina were already bracing for impact.

In South Carolina, Gov. Henry McMaster declared a state of emergency Saturday to give his state time to prepare for the possible arrival of a hurricane. McMaster emphasized that there's no way to know yet when and where the storm will hit land, or when evacuations might be called.

The U.S. Navy is making preparations this weekend for its ships in the Hampton Roads area to leave port as Tropical Storm Florence approaches the East Coast.

The U.S. Fleet Forces Command said in a news release Saturday that the ships will get ready in anticipation of getting under way Monday to avoid storm damage.

Adm. Christopher Grady said in a statement that the decision was based on Florence's current track, which indicates the area could see strong sustained winds and storm surges.

The National Hurricane Center said Saturday that Florence will start to rapidly intensify Sunday, and be a major hurricane by Tuesday.

The news release notes that plans could change if forecasts indicate a decrease in the strength or change in the track of the storm.

On Friday, North Carolina Gov. Roy Cooper declared a state of emergency and urged residents to use the weekend to prepare for the possibility of a natural disaster.

"We are entering the peak of hurricane season and we know well the unpredictability and power of these storms," Cooper said.

Swells generated by Florence could cause dangerous rip currents and coastal flooding Saturday in areas including coastal Delaware and New Jersey, the National Weather Service said.

At 11 a.m. EDT, the Miami-based hurricane center said Florence's maximum sustained winds were estimated to be 65 mph. The storm was centered about 835 miles southeast of Bermuda and moving west at 7 mph.

Florence becomes a hurricane, takes aim at US Southeast
Carolinas brace for extremely dangerous Hurricane Florence
Surge, wind, rain, floods: Hurricane Florence could hit hard
Florence and the coastal dilemma: How long will it hover?
Evacuations begin in Bahamas as Dorian bears down