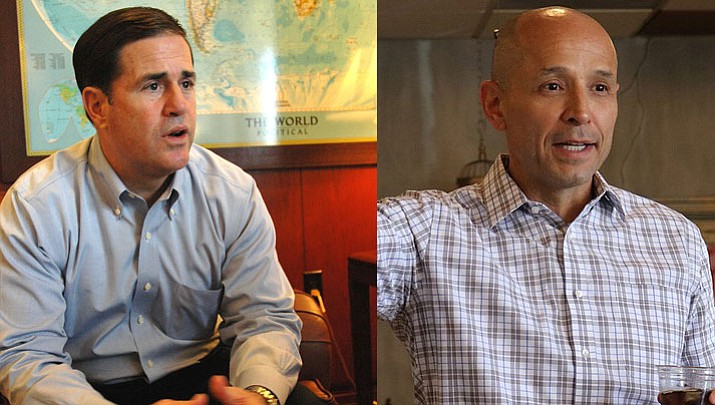 Incumbent Gov. Doug Ducey and David Garcia are on the ballot for Arizona Governor.

State election officials say 1.2 million voters mailed in a ballot or showed up at the polls for the August 28 primary. That beat the previous record of nearly 1 million voters in the 2010 primary.

The total for 2018 represents around 33 percent turnout.

"The split between Republicans and Democrats is just very, very narrow compared to what it normally is," said Garrett Archer, a senior elections analyst with the Arizona secretary of state.

Chad Campbell, a political consultant in Arizona and former Democratic lawmaker, chalked up the increased Democratic participation to anti-Trump sentiment.

"It signals increased enthusiasm on the Democratic side, and I think that we're seeing that across the country," he said.

The increased participation comes at a time when national Democrats see Arizona as possible place to flip seats. A competitive U.S. Senate race between Democratic Rep. Kyrsten Sinema and Republican Rep. Martha McSally is at the top of the ticket, with Democrats hoping to flip McSally's former congressional seat in their bid to take control of the House of Representatives.

But doing so may rest on Democratic candidates wooing a swath of independent voters to help them outnumber Republicans: Arizona has around 1.26 million Republican voters and around 1.22 million unaffiliated voters, compared to about 1.1 million Democratic voters.

Arizona Democratic Party chair Felecia Rotellini says the party is confident that voters are engaged, but "we're not taking a single vote granted." Field offices around the state are continuing to register people to vote and signing voters up for permanent vote-by-mail status, she said.

On the other side of the aisle, Republicans are continuing to ramp up efforts to hold their seats – including defending Gov. Doug Ducey as he seeks a second term against Democratic challenger David Garcia.

Renae Eze, the Arizona communications director for the Republican National Committee, cited the increased Democratic turnout to a spike in competitive primaries — and said she thinks Arizona Republican voters will continue to out-vote their Democratic counterparts.

“I think we’re going to keep that lead, in good part to the great candidates we have,” she said.