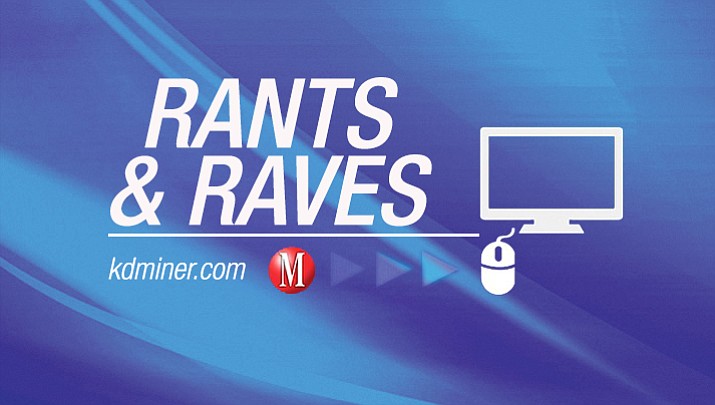 Got something on your mind? Tell us about in 40 words or less. If your rant or rave is about a specific story, please mention the headline.

Common sense is key in the ‘war on opioids’ abuse: Regarding Sharon Weber’s letter about opioids; well stated Sharon! I could not have said it better myself. There are two sides to this story!

#Notinvisible: Why are Native American women vanishing: So sad and frustrating. My heart goes out to these women. It is confusing to be your own nation and still expect another nation to do police work on the case. Maybe the answer is to have only one nation.

Don’t understand capitalism?: Excellent explanation. However, “It takes a bit of morality,” something that a lot of the upper 10 percent don’t seem to possess!

No fueling the hate: If you SAY you are a Christian, ACT like one. No more hate and no more politics.

It’s tragic we’re not united: You ask why is our country so divided and the answer in one word is Trump, which I know will probably not go over well in this area.

Jon Kyl sworn in to McCain’s senate seat: Excellent choice. Experience, honesty. I wish he would consider another run for the seat.

It’s tragic we’re not united: Lori. We have a president who is a proven divider, and a republican party that is quaking in their jackboots so as not to upset him.

Republicans hit Trump for criticizing Justice Dept.: Thank you Jeff Flake. There really are some politicians who put country before party!

Thousands of teacher vacancies: Currently parents of private school students can obtain partial funding to tuition from the state. Maybe if they had to pay their own way, public schools would have more money.

My life’s journey with John McCain: What a great story. Many people in this country be they democrat, republican or independent will remember and honor this great man always.

Public education loses battle in funding war: Public education will ALWAYS lose. Education monies will be siphoned off by the rich backers of the private schools. It’s a done deal.

More people voted for City Council than mayor: I know personally I didn’t want to vote for either candidate for mayor. When you aren’t confident in either person. It is better not to vote! I did the same for the Presidential election.

Construction on Dunkin’ Donuts almost complete: Why is this big NEWS we have had three donut shops open and close here because of WALMART where you can get fresh donuts every morning for cheap.

Loud music in restaurants and stores: It’s hard to have a conversation with friends and servers when the music is so loud that you have to yell to give your order or ask questions. Please turn it down.

Trump is right to end Obama’s fuel economy scheme: Scheme? It’s true we CAN “buy whatever we want,” but also true that we CAN pay the price for foolishly ruining the environment future generations will inherit. A “Penny Wise and Pound Foolish” argument. Pollution kills people every day! DUH!

Trump is right to end Obama’s fuel economy scheme: Because Americans don’t want to save money on gas or have clean air! Yeah it’s all Obama’s fault just like always.

Poor groceries: I would like to complain about the rise in price, or the smaller size of most of the groceries in the stores recently, after the minimum was raised. No more income for the folks on social security, etc.

Cindy McCain’s speech: I recommend RE-PLAYING John McCain’s funeral footage every month until America remembers what she is REALLY all about. The best two words NEVER spoken: Donald Trump. (Why is he doing this to us ?!?) Come on-heroes.... we NEED you !

Old Jail: I have wanted to see the old jail since moving here. It should be a tourist attraction, like the Gila County Jail.

Yocum defends sales tax, credits city with progress on airport: What Yocum said in this article is good - TPT is needed, city can under tax itself into poverty, airport and industrial park in much better position to grow. The unfortunate way he handled his legal problems will hurt reelection.