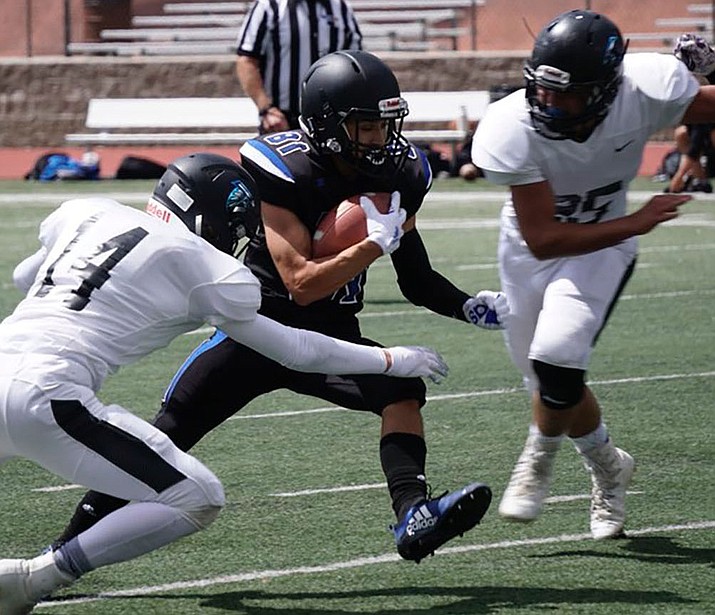 Kingman Academy’s Nate Perea has 262 yards receiving and four touchdowns this season. Perea will look to add to those numbers Friday night against Coronado High at Southside Park. (Photo courtesy of Ralph Amsden/ArizonaVarsity.com)

KINGMAN – There will be two hungry teams taking the field Friday night at Southside Park.

Not only will both squads be looking for the first win of 2018, but the Kingman Academy High School football team will finally play on its home turf at 7 p.m. against Scottsdale’s Coronado High.

“This is the longest I’ve ever waited,” senior Nate Perea said of playing a home game. “It feels weird because we haven’t even played on that field at all.”

The Tigers (0-3) don’t get the luxury of practicing on their game field, so Friday night will be the first time playing there since summer workouts.

But Perea isn’t picky about where he catches passes from quarterback Academy quarterback Dallas Edwards.

“We would usually go to the park every weekend (during the offseason) and throw the ball around,” Perea said. “We would run routes and kind of learn each other because we never played on varsity together. We got better over the summer and built a friendship and a bond.”

All the extra work has paid dividends this season as Edwards and Perea have connected 17 times for 262 yards and four touchdowns.

A big chunk of those yards came in a 34-28 overtime setback to Parker – 218 yards and four scores to be exact.

“They’re on the same page,” Morgando said of the duo. “They’ve worked a lot together. It’s just ideal when they’ll do that on their own. It’s always a good thing when they get the routes down and know when to throw.”

Perea was held to two catches last week at Lee Williams, but he knows the Dons (0-3) should give him more opportunities to have Edwards throw his way.

“Coronado plays man a lot,” Perea said. “They play off (the ball) so we’re going to try to use that to the best of our ability. We’ll just have to work hard and execute and I think we’ll come out with the win.”

The junior has 315 yards passing and two touchdowns along with 119 rushing yards and two scores.

“Coronado kind of runs a spread look,” said Academy head coach John Morgando. “They have some pretty nifty skill players out at receiver. The quarterback is pretty good with the ball in his hands.”

But as was the case last week against the Vols, the depth of both teams will likely determine the winner. The Dons have 35 players on their roster compared to 30 for the Tigers.

With that being said, Academy has focused a lot on conditioning.

“We’re in pretty good cardio shape,” Morgando said. “What we can’t replicate is the attrition that comes from playing a game. We get the best look we can in practice, but it’s hard for our varsity guys to get a good look because we’re not deep there right now.”