Prep Roundup: Tigers take down Coronado for first win of 2018 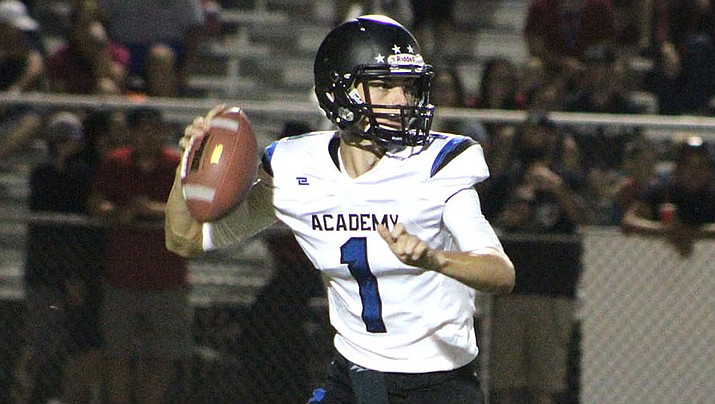 KINGMAN – The Kingman Academy High School football team needed a spark Friday night after Coronado tallied an interception on the opening drive of the second half.

Trevor Lowry provided that big play and it shifted the momentum in favor of the Tigers on the way to a 24-13 win at Southside Park.

“It was a great sequence of events for us, some good plays for us,” said Academy head coach John Morgando. “We get the blocked extra point by Trevor and that takes a little bit of wind out of their sails. They’re thinking ‘We’re about to tie this’ and then we blocked the kick.”

The Tigers (1-3) quickly added to its lead on their next possession when Charlie Anderson kicked a 25-yard field goal.

“It’s a relief to get that first victory,” Morgando said. “The kids’ first victory this year, my first as a head coach at the varsity level. It’s always nice to get that out of the way. It builds some confidence.”

It also helped that Morgando and his staff could get more players in the mix.

The Tigers did have Nate Perea catch a touchdown and Lowry rush for a score, but a few new faces also made an impact.

“We game planned that we wanted to get more guys involved,” Morgando said. “We managed to get that installed and get a few guys touches. Derrik Hicks scored his first touchdown on probably his only third or fourth catch of the year.”

Academy will look to start a winning streak at 7 p.m. Friday with a road contest at Bourgade Catholic (3-1).

At ALA Ironwood, the Kingman High School football team couldn’t find an answer for American Leadership Academy – Ironwood in a 20-point second quarter and it proved costly in a 40-6 loss Friday night.

The Bulldogs (3-1) compiled 246 yards of total offense, but scored its lone touchdown of the game in the first quarter on Austin Dias’ 62-yard scamper.

Dias finished the game with 135 yards, but the rest of the team was held in check. Gavin Randall had 22 yards on three carries, while Darrell Mitchell finished with 15 yards rushing.

Defensively, Kingman’s Dom Concepcion tallied an interception and returned it for 34 yards.

The Bulldogs welcome Paradise Honors (2-2) to town at 7 p.m. Friday.