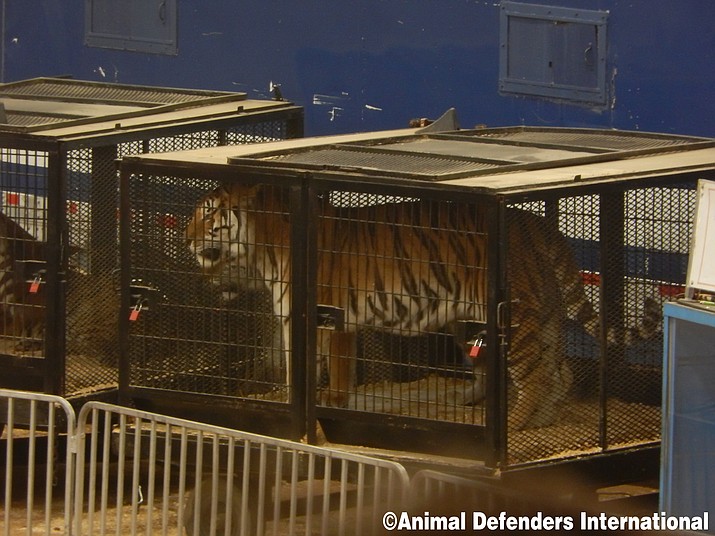 LAKE HAVASU – The circus can be a fun family activity. Watching the acrobats, clowns, and animals put on a memorable show. But what can happen behind the scenes is a different story.

Animal Defenders International is calling on the local community to stay away from the Jordan World/Shrine Circus and avoid supporting an industry that involves cruelty and suffering to animals.

Studies have shown the use of wild animals in traveling circuses show that circuses cannot meet the physical or behavioral needs of wild animals. Animals are confined in small spaces, deprived of physical and social needs, spending excessive amounts of time shut in transporters.

These animals are often seen behaving abnormally; rocking, swaying and pacing, all indicating that they are in distress and not coping with their environment. ADI’s video evidence has shown how these animals are forced to perform tricks through physical violence, fear and intimidation.

“Wild animals belong in the wild, not chained and confined, forced to perform, deprived of all that is natural to them,” Christina Scaringe, ADI general counsel said. “These inhumane, unsafe acts perpetuate misconceptions which exacerbate wildlife trafficking.”

ADI is calling on supporters to warn audiences of the behind-the-scenes suffering of animals in traveling circuses when the Jordan World/Shrine Circus comes to Fort Mohave and Lake Havasu.

Local campaigners with ADI will be handing out leaflets and informing audiences about the suffering and telling people that the animal circus is no longer acceptable in a modern, advanced society. Circus owners are urged to leave animals out of future productions.

“Keeping wild animals like elephants, tigers and bears shut in small spaces or chained up, then beating them to perform tricks for human entertainment, shames us all,” Carolyn Long, ADI supporter said.

The circus is coming to Kingman, but not everyone is excited
Community View | Animal acts in circuses are antiquated and belong in the past
Kingman Photos: Bear With Me
Time to end circus cruelty - to do otherwise is inhuman
Letter | Danette Zachary: Council’s cowardice in the face of animal abuse allows cruelty