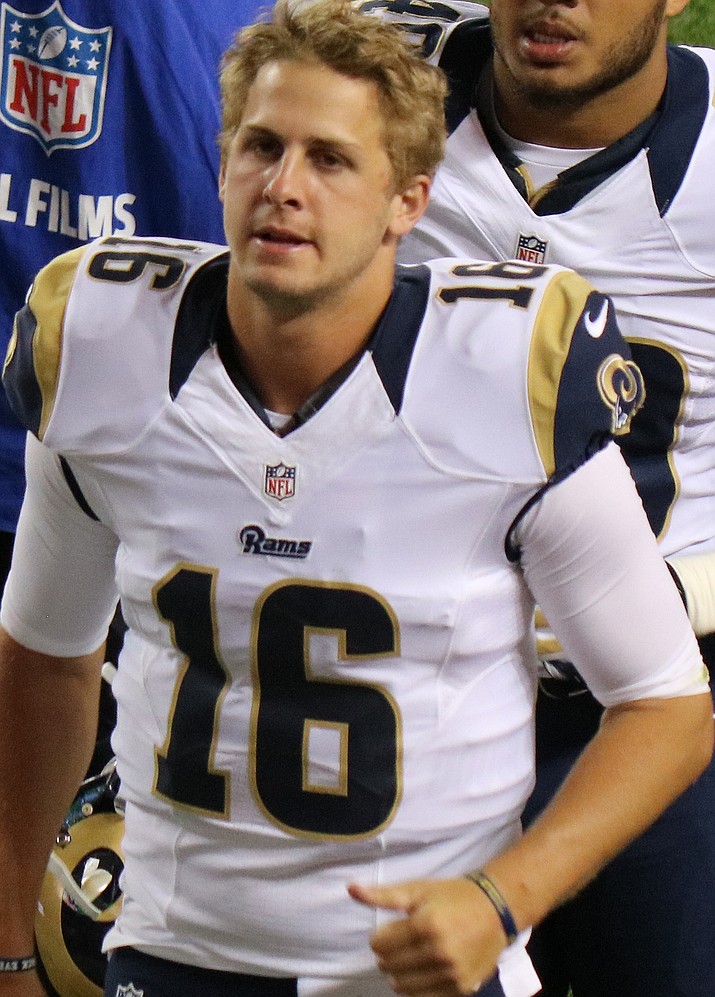 Jared Goff threw for 354 yards and a touchdown and the Los Angeles Rams dominated the Arizona Cardinals 34-0 on Sunday. (Photo by Jeffrey Beall [CC BY 4.0 (https://creativecommons.org/licenses/by/4.0)], from Wikimedia Commons)

The Rams have won their first two games for the first time since 2001, when they started 6-0 en route to the third Super Bowl appearance in team history.

It was the second time in Gurley's four-year NFL career that he has three rushing scores in a game. The other time it occurred was Week 15 at Seattle last season. Gurley finished with 42 yards on 19 carries as he played only three quarters due to cramps.

Goff, who has six 300-yard games, completed 24 of 32, marking the third time in 24 starts he has completed more than 70 percent of his passes when making 25 or more attempts. The 354 yards were only a yard off of his career high, set last season against Houston.

The Cardinals didn't cross midfield until the final minute and managed only five first downs as they fell to 0-2 for the first time since 2005. Sam Bradford, the first overall draft pick by the Rams in 2010, was 17 of 27 for 90 yards in his first start against his former team.

The Rams opened the scoring early in the second quarter with Gurley's 11-yard run off right end. They successfully went for the 2-point conversion on Gurley's run; Greg Zuerlein sustained a groin injury.

Johnny Hekker's 20-yard field goal extended the lead to 11-0 before Gurley had a 1-yard touchdown and 2-point conversion on the final plays of the first half.

The Rams extended their lead to 27-0 in the third quarter on Gurley's 2-yard run and Goff's pass to Malcolm Brown on the conversion. They added another touchdown in the fourth period when Goff connected with a wide-open Tyler Higbee from 3 yards.

The Rams went for the 2-pointers after their first three touchdowns due to Zuerlein's injury, which was announced during the first quarter. The Rams received the opening kickoff, so it is likely the injury happened in pregame warmups.

JoJo Natson, signed on Wednesday after 2017 All-Pro Pharoh Cooper was lost for the year with an ankle injury, had a strong debut as the team's returner, averaging 22.2 yards on six punt returns and one kick return for 22 yards. His 60-yard punt runback in the second quarter helped set up Gurley's second touchdown.

Cardinals: WR Larry Fitzgerald injured his hamstring during the fourth quarter and did not return.

Rams: Host the Chargers in the first regular-season Battle of Los Angeles between the two teams.