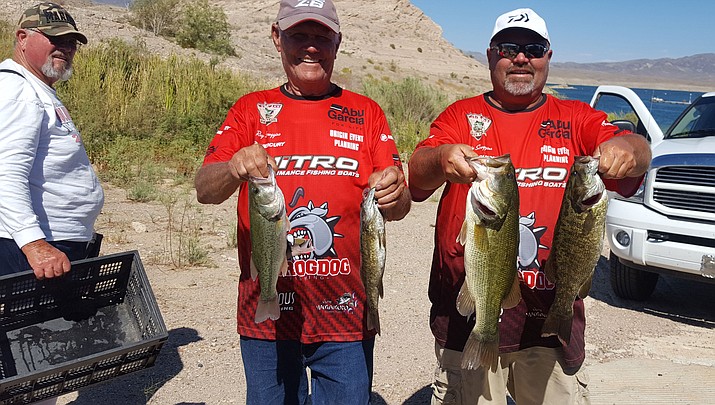 Ray Scroggins (L) and Donnie Scroggins hold some of hte fish they caught to win the KBC tournament at Lake Mead.

It was hot as six teams of anglers from Kingman Bass Club took to the water on Lake Mead to test their skills on the largemouth and smallmouth bass that call this huge Colorado River impoundment home.

The anglers fished out of Temple Bar, and the daytime temperature registered 109 degrees.

Despite these difficult circumstances, most of the teams brought in the five-fish limit of bass.

The father-and-son team of Ray and Donnie Scroggins took first place. They caught the heaviest bass brought in during the one-day tournament. The hefty largemouth weighed 5.68 pounds and anchored their limit that weighed 9.65 pounds. Their limit included two largemouth and three smallmouth bass.

Donnie Scroggins said he caught the big fish on his second cast of the day using a crawdad jig in about 2 feet of water.

“There were a lot of shad in and around the grass,” Donnie said. “I think that’s why the bass were there.”

Scroggins said his team caught at least 30 fish during the tournament.

Donnie noted that on Saturday, the day before the tournament, the fishing had been great. “It was cooler, and we caught a lot better fish Saturday,” he said. “I bet we had 17 pounds.”

Greg Parker and Brian Ravelo came in third place with 8.65 pounds. Scroggins said Parker/Ravelo started off using frog-imitation lures, but switched to jigs as the day warmed up.

The club’s final regular tournament will be held Oct. 7 on Lake Havasu.

A fish-off to determine the top 2018 tournament trail winners will be on Alamo Lake in November.