Beale Street Theater brings “Death of a Salesman” to life 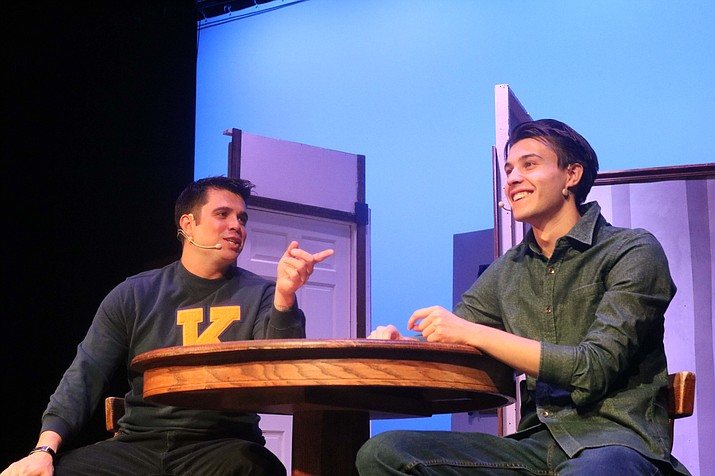 Audiences will get a first look at Matt Lambert (left) as Biff Loman, and Adam Gatliff, playing Happy Loman, at the production’s opening performance of “Death of a Salesman” at 7 p.m. Thursday at Lee Williams High School, 400 Grandview Ave. (Photo by Travis Rains/Daily Miner)

KINGMAN – The themes and takeaways from Arthur Miller’s “Death of a Salesman” ring as true today and resonate with modern audiences as much as when the play was first published in 1949 because the importance of family, appreciating what you have, and struggles paired with embarking on the American Dream remain relevant even in 2018.

Beale Street Theater will take on its first drama in “Death of a Salesman,” which director Bob Blake calls, in his director’s note, “one of the most prolific plays to grace the stage.”

Kristina Michelson, executive director for Beale Street Theater, says the play focuses on salesman Willy Loman and his family. The family’s patriarch has dreams and aspirations for himself and his two sons, Biff and Happy, but those goals for the future don’t quite materialize like he planned.

Matt Lambert, who plays eldest son Biff Loman, says his character is returning home for the umpteenth time having been unable to find gainful employment.

“I think he finally has figured out who he is, and that’s kind of how his story intertwines with Willy’s,” Lambert said of his character.

“He’s told by his mother that being a businessman specifically is a very responsible, very proud job to have, and that’s what the Lomans are known for,” he said. “Though, the Lomans are much more happy with physical labor.”

Matt Hecht, artistic director, said “Death of a Salesman” may resonate with Kingmanites who remember the most recent depression. The play is set in the ‘40s following the Great Depression that hit in 1929, with characters still trying to combat financial hurdles.

“A lot of people in Kingman experienced the depression in the 2008 time frame, and people kind of understand the concept that finances are tight, family is tight,” he said. “And at the end of the day, that is most important in life.”

“It hits on common human themes that everyone can relate to, and so it surpasses a time setting and a place,” Michelson said of the play’s relevance to today’s culture. “This could be lived in any city in the country.”

Beale Street Theater has had success with producing lighthearted, fun, family-oriented musicals. This production, however, marks a dramatic shift in what audiences will experience come show time. Hecht said people love the happy, fun, singing-and-dancing shows, but that audiences have also been curious as to when the theater would produce a drama.

“We haven’t really been able to dig into something deep that you can really sink your teeth into,” he explained. “This is kind of a great show for that. It’s still noteworthy, it’s got a lot of depth to it.”

The production opens with its first performance at 7 p.m. Thursday, with shows scheduled for 7 p.m. on Friday and Saturday as well. There will also be a Saturday matinee at 1 p.m. Tickets are $12 and are available at www.bealestreettheater.com, Kingman Center for the Arts, 208 E. Beale St., or at the door starting an hour before show time. The venue for all performances is the auditorium at Lee Williams High School, 400 Grandview Ave.

“We want to bring you this American tale of hopes and dreams of everyday people, and the bitter reality of those broken promises,” writes Blake. “We chose this play to articulate that there is a Willy Loman in all of us who have dealt with family strife, failed dreams and disappointment. However, a relentless drive lives in us to have no rock bottom in life.”