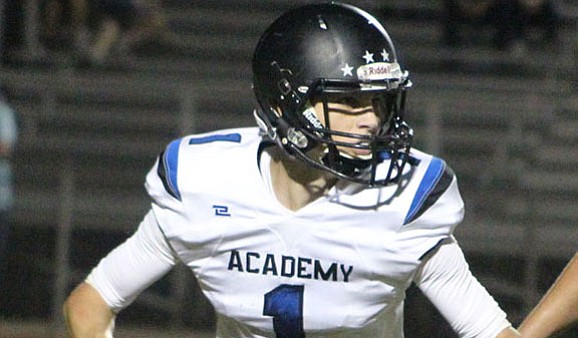 KINGMAN – Dallas Edwards began this season with a lot of weight on his shoulders when he was named the starting quarterback for the Kingman Academy High School football team.

But that pressure is starting to dwindle as the junior adjusts to playing at the varsity level.

“I feel like it’s getting easier and I’m adjusting to it better,” Edwards said.

That comfort level will undoubtedly pay dividends for the Tigers as they prepare for their first season in the 3A West Region.

But first Academy has to make the trip to face a familiar foe in Bourgade Catholic at 7 p.m. Friday.

The two teams usually open the season in Flagstaff, but this year they’ll play on a different field. Edwards isn’t worried about the venue though. Instead he is making sure he improves as a player to help the team.

“I always try to progress every single game,” Edwards said. “I try to get it to different receivers, try to make better passes and try to make a better game out of everything so we can win in the end.”

Academy did what it needed to do last week to pick up a 24-13 victory over Coronado High. But Edwards knows the Tigers still need to make some improvements.

“There were too many turnovers,” Edwards said. “We’re going to have to cut that down if we want to win against Bourgade.”

While Edwards did throw three interceptions in the game, Academy head coach John Morgando was quick to say that it needs to be a team effort.

“It’s not just interceptions,” Morgando said. “It is fumbles. At Parker, it’s an onside kick that we don’t recover. We have to eliminate turnovers in general as a team.”

However, Edwards is well aware of the areas he can improve on to help the Tigers.

“I’m focused on just controlling the ball better,” Edwards said. “And reading the field a lot better. Not just throwing it up. Making better reads will change that.”

Edwards will get that chance Friday night on the road and Academy should be in good shape for a close battle.

“Bourgade is very similar to us in the schemes that they run,” Morgando said. “They’re a spread team. They throw some very similar route combinations and run some very similar run plays to us. In that way, it’s kind of a good matchup because we sort of know what they’re trying to do.”