Think before you post: Hoaxes are taken seriously (at all times) locally 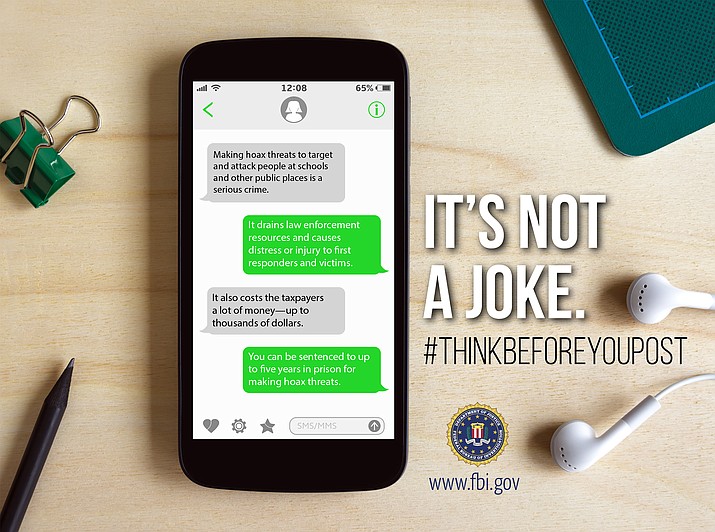 According to the FBI, those who send or post these threats can receive up to five years in federal prison, or they can face state or local charges. (Courtesy of FBI)

In the unfortunate circumstances on the news, citizens may hear of a school shooting. As days pass in other towns or cities, local law enforcement officials may respond to calls regarding someone going to a school or public area to attempt to commit a mass shooting. Sometimes those calls are in reference to posts on social media posted as a joke.

According to the FBI, those who send or post these threats can receive up to five years in federal prison, or they can face state or local charges.

Anita Mortensen, Mohave County Sheriff’s Office public information specialist said that there have only been a few instances where MCSO deputies have handled social media posts that were a hoax. KPD has also handled some similar cases in the past.

When threats like these are made in the area, officials make sure to investigate the issue to the fullest extent.

“We don’t approach them as a hoax. Those days are long gone,” Rusty Cooper, Kingman Police Department deputy chief said.

Some may say, “Well isn’t this freedom of speech?” According to Arizona Revised Statute 13-2916, it’s unlawful for a person to terrify, intimidate, threaten or harass a specific person(s) to threaten to inflict physical harm to any person or property in any electronic communication.

That same ARS code states that the section does not apply to constitutionally protected speech or activity or any other activity authorized by law.

“Your free speech is overcrowded by that aspect,” Cooper said.

Law enforcement take these hoax’s seriously. Mortensen said that if a crime was committed then those that made the post would be charged accordingly. Students who have made these sorts of posts have been charged with criminal offenses and expelled from school.

Not only will the person be charged for using social media to cause terror but they will also have to pay for the use of emergency response.

Under ARS 13-2907 is states, a person who commits false reporting by initiating or circulating a report of a bombing, fire, or other emergency intending to interrupt the occupation of any building, place of assembly or public space, put a person in fear or cause action of official or volunteer emergency personnel.

Those who commit a violation under this section are liable for the expenses used. Expenses would mean the cost of providing police, fire fighting, rescue, and emergency medical services at the scene.

According to the FBI, law enforcement agencies have limited resources and responding to a hoax threats divert officers. Threats can also cause emotional harm to students, parents and school personnel.