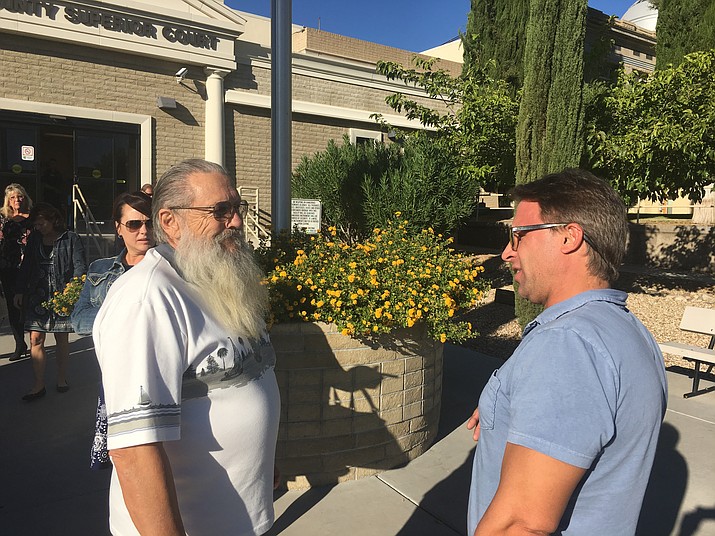 KINGMAN – The first day of testimony in the first-degree murder trial of Alfredo Gerardo Blanco focused on two rings belonging to Sid Cranston Jr. that were sold to a local jewelry store, FBI interrogation techniques of accomplice Bill Sanders and where Cranston stayed before he disappeared on June 16, 2015.

Prosecuting attorney Bob Moon did most of the questioning of five witnesses Wednesday morning, setting the scene of the murder and laying out the background on Cranston and his relationship with Blanco, who is charged with killing Cranston and burying his body on a ranch off Blake Ranch Road.

FBI special agent Tracy Keegan said Sanders denied involvement in the burial at first, but eventually opened up when FBI agents used special techniques such as minimalizing or rationalizing his involvement in the crime to gain more information during a Jan 6, 2017, interview.

“Mr. Sanders was very soft-spoken and very nervous,” she said. “He didn’t just come out, ‘This is what happened.’ We had to pull it out a little bit.”

Keegan went on to explain how the FBI was led to the burial area by Sanders, and using probes, was able to flag off a 20-foot-by-20-foot area in which the ground was soft, indicating it had been disturbed.

From that point, FBI agents and searchers used shovels to dig up the body on Jan. 7, 2017.

“The whole premise is to create a hole. If there’s a human being decontaminating, there’s a possibility you’ll smell it, especially with a shallow grave,” she added.

Bob Carlson, a general contractor who hired Cranston for civil engineering work, was building a million-dollar home for ranch owner Don Bishop, and said he was on the property almost daily.

He’d seen Blanco working on remodeling the old ranch house and driving heavy equipment, including a backhoe with an 8-foot bucket.

Cranston, who came to Kingman from New York, had sold his home and business, but retained rental properties in Kingman and hired Blanco to manage the properties and collect rent.

Cranston would stay with Carlson and his wife, Teri, during visits to Kingman to check on his properties. Part of the reason he came June 2015 was for financial reasons, Carlson said.

Carlson received a call from Blanco on June 17, 2015, asking if he’d seen Cranston, who was supposed to attend a City Council meeting the night before. After searching some of Cranston’s properties, including one he had gone to show on Stockton Hill Road, Carlson filed a missing person report.

Andy Raynor, who knew Cranston since the fifth grade in New York, identified two of Cranston’s rings that were sold to Myron Storing, owner of Luchia’s Jewelry store. He recognized the wedding ring that Cranston wore on his right hand after his divorce, and provided sketches of the rings to police detectives.

Raynor organized a number of search parties for Cranston, which he said was a “constant effort.”

Moon asked about the level of Blanco’s involvement in the searches.

“It just seemed like he was there. At the first meeting, he just stared at the map for a long time,” Raynor said.

Sanders was on the witness stand for most of Wednesday afternoon, recounting how he was called upon by Blanco to help him move something at the ranch on the day of June 16, 2015.

He saw Blanco standing by the barn when he arrived.

“I walked up to him and he said, ‘I want to show you something,’” Sanders said. “I followed him into the house and he turned around said, ‘I shot Sid.’ I started looking around and saw someone leaning up against the door. I took his pulse. Blanco said, ‘Don’t bother. He’s gone.’ His whole side was blown away.”

Blanco claimed it was an accident, that they were trying to get a snake out of the wall, Sanders said. He told him to go to the police, but Blanco said, “No, the hole is already dug,” Sanders said.

Sanders said he felt threatened, was afraid for his family and could end up in the grave with Cranston if he didn’t cooperate, so he picked up Cranston’s legs and helped put him on a tarp, carried him out to a backhoe that Blanco had parked outside the door and placed the body in the bucket.

“Blanco backed it up and drove it over to the hole he dug,” Sanders continued. “It was freshly dug. He drove up to the hole and tilted the bucket and dumped the body.”

He backfilled the hole and drove back and forth over it to compress the ground, Sanders said.

Sanders kept quiet during initial conversations with FBI agents who visited his home in 2016, and then was called down to Kingman Police Department on Jan. 6, 2017, when he opened up to FBI agent Brian Fuller about the crime.

Attorney Moon showed Sanders a copy of his plea agreement in which he pleaded guilty to concealment of a dead body and tampering with evidence in exchange for his testimony at the trial.

He has yet to be sentenced, and faces probation and a year of jail.