Prep Football: Tigers on the hunt for win at Chino Valley 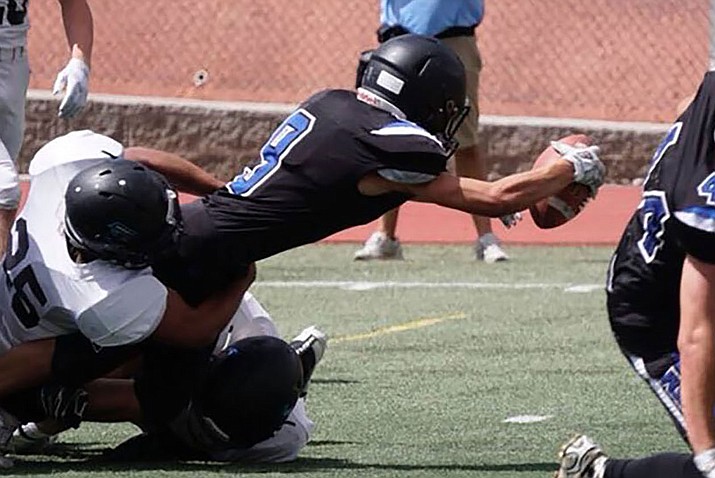 KINGMAN – Tyler Wheeler and the Kingman Academy High School football team know what needs to happen at this point in the season.

The Tigers can’t make mental mistakes or turn the ball over when they open 3A West Region play at 7 p.m. today at No. 18 ranked Chino Valley (3-2).

“We really need to pick it up right now,” Wheeler said. “We can’t have six turnovers a game like we’ve been having. We have to fix the bug, work out the kinks and we’ll be fine.”

Wheeler will play a large part in helping 35th-ranked Academy (1-4) get its first win in a new region. The senior linebacker leads the team with 67 tackles (51 solo) along with four tackles for loss and two sacks.

“I just love the game of football,” Wheeler said. “Ever since sixth grade, I’ve been working so hard to get better. It’s paid off – working hard in the weight room, showing up to practice and running as hard as I can.”

Wheeler’s success hasn’t just been about him though.

He’s made sure to use his abilities to help teammate Connor Alleman. The junior ranks second on the team with 55 tackles and also has two fumble recoveries for the Tigers.

“I’m so proud of Connor,” Wheeler said. “They moved him to linebacker this offseason and I told myself, ‘Alright, I’m going to kind of take him in and try to teach him.’ He’s done amazing. I haven’t even had to teach him that much. He’s naturally aggressive and he’s good at reading where the ball is going. It’s really nice to have another linebacker like that out here.”

“We moved him inside and he’s done really well there,” Morgando said of Alleman. “Then you get a guy like Wheeler, who has the experience, teaching him everything.”

The pair will no doubt be key for the Tigers as they look to Chino Valley quarterback Michael Paulus. The senior has racked up 432 yards and seven touchdowns on the ground and thrown for two more.

But Wheeler isn’t focused on stopping one player as he knows Academy just needs to focus on itself.

“I think we just need to get a little smarter in our blocks,” Wheeler said. “Just do our own jobs because a lot of times we’re trying to do too many jobs at the same time and that’s when things go wrong. If everyone does their own jobs, we’ll be 100 percent fine.”

Morgando, meanwhile, is looking at the bigger picture. The Tigers could easily forget the first half of the season, but that’s not what the first-year head coach wants.

“You still have to look back, you have to take the whole collection of things,” Morgando said. “Every game is a new game and you have to approach it that way. And every quarter is a new quarter. But we still have to look at, ‘What have we been doing well and how can we make sure we keep that well?’ And ‘What have we been doing poorly and how can we improve that?’ That has to be the mindset.”