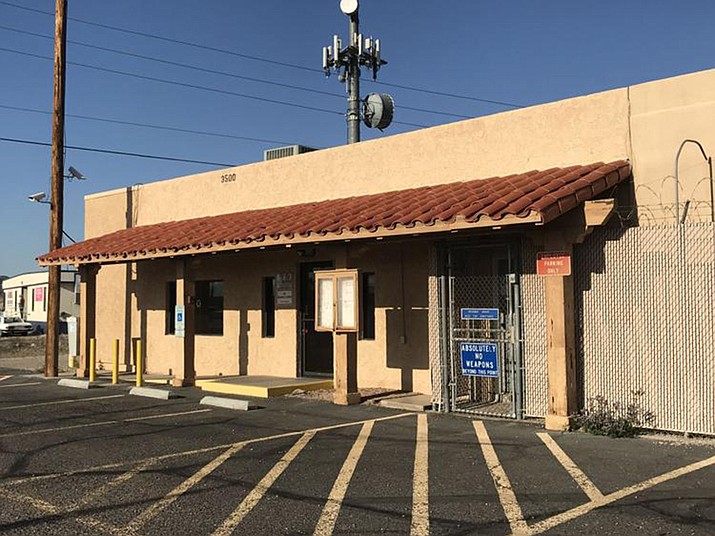 The sheriff’s substation on State Route 95 could get a new home near Interstate 40 if Mohave County supervisors proceed with a satellite county campus. (Brandon Messick/For The Daily Miner)

LAKE HAVASU CITY - A facility near the junction of State Route 95 and I-40 could be home to a new hub of county services, but Mohave County supervisors will have to consider their next steps carefully. To pay for it, supervisors would have to unanimously agree on an extension of a quarter-cent sales tax.

The Mohave County Board of Supervisors accepted a report Monday from public works officials describing the planned new facility at the Franconia traffic interchange, but took no action on the proposal. The proposed 19,000 square-foot facility would consolidate services that have traditionally been offered by Mohave County Sheriff’s substations in Mohave Valley and Lake Havasu City. The facility also would house a new medical examiner’s office, and could serve as a shelter to be used by Mohave County animal control officers. According to Public Works Director Steven Latoski, the facility would cost an estimated $9.78 million.

Mohave County Supervisor Buster Johnson said Monday that funding for the new facility would rely on an extension of a quarter-cent sales tax by the county, which would expire this November. But even then, sacrifices may have to be made to fully fund the project.

“With the numbers presented to us by county staff, we would have to scrub the animal control portion,” Johnson said. “The Lake Havasu City and Mohave Valley sheriff’s substations are in great need of updating, and this new project would save costs. It would be providing the same service with a smaller amount of tax dollars.”

The addition of a new medical examiner’s office could provide such services not only to Mohave County agencies, but also to other rural counties that routinely delegate medical examination to larger agencies such as the Maricopa County Medical Examiner’s Office.

“La Paz and other counties are very interested in using a possible facility here,” Johnson said. “A lot of counties want to use a facility here because on the West Coast, it’s harder to get things sent to Maricopa County.”

Supervisor Ron Gould was skeptical of the proposed facility. The facility would result in the closure of Sheriff’s substations in Mohave Valley and Havasu.

“Someone needs to convince me that this is a worthwhile investment of the money and that somehow this will make operations smoother than they are now,” Gould said.

Mohave County Sheriff Doug Schuster addressed supervisors at Monday’s board meeting, and the substations of Mohave Valley and Havasu were of particular concern.

“The substations are atrocious,” Schuster said. “There’s a significant need for replacement. A joint, multi-service building would be a cost savings. Operationally, this would be an administrative complex for deputies to write reports and submit things into evidence, and would merge Mohave Valley and Havasu’s services into one river district to cover the entire area.”

Mohave County attorneys informed the board that the quarter-cent sales tax extension needed to fund the construction of such a facility would require a unanimous vote from supervisors. The item would also have to be properly agendized for a future meeting.