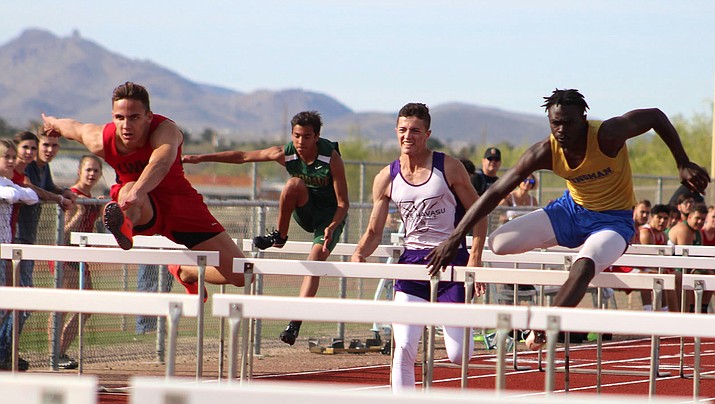 KINGMAN – Jamal Cash doesn’t shy away from competition, especially when it comes to the 110-meter hurdles.

It’s the Kingman High School senior’s favorite event and he showed why Wednesday as he finished first with a personal record 14.85 to outduel Lee Williams’ Enzo Marino, who took second at 15.32.

“It’s a good thing – I look at it as I push him and he pushes me,” Cash said of Marino. “We want to do well together.”

The two battled again in the 300 hurdles and Cash was once again victorious with another personal record 40.91, while Marino finished third at 41.46.

However, it is worth mentioning that Marino recently returned from rehab and this was just the second time the two have battled. But that doesn’t mean Cash is going to take the competition lightly.

“He’s coming back stronger and faster,” Cash said of Marino. “I’m ready for him though. I’m going to keep working and I’m going to prepare for it. I’m here.”

Cash also competed in the long jump and his leap of 19-feet, 8-inches was good enough for second and another personal record.

Kristopher Ashton set a personal record in the shot put at 45-feet, 9-inches to round out the first-place finishers.

Herrera, meanwhile, was second in the high jump at 5-feet, 10-inches as the senior just missed a personal-best 6-feet.

“It hurts when you don’t clear something you know that you should clear,” Herrera said. “But I need to keep practicing, listen to my coach for every single jump, work on getting my form down and just get better every time I do it.”

Academy’s Connor Alleman is in a similar situation as the junior competed in the 1,600 for just the second time.

He cut 15 seconds for a personal record 5:16:00, but he knows he has a lot of work to do for a state-qualifying time.

“I’m probably not going to make state on the mile, but I’m trying to make progress for next year to make state,” Alleman said. “State is 4:40 something and I ran a 5:16 today. So it’ll be rough.”

Meanwhile, the Lady Vols took second on the girls side with 342 points and Lake Havasu was first at 420. The Lady Tigers tallied 66 points for fourth and the Lady Bulldogs were eighth.

Lee Williams was also successful with four first-place finishes, while Academy and Kingman each tallied one top finish.

“I think it’s cool how we can all compete against each other,” Heidorf said. “Of course Lee (Williams) is better, they’re a bigger school. But we have fun.”